I spent this morning in the late middle ages. I’ve come to a small city in northwestern France that surely has one of the largest intact 15th and 16th century town centers. The town is called Vitré. Have you ever heard of it? I probably wouldn’t know of it if George and I hadn’t stumbled into it about ten years ago. We stayed for only a few hours on a Saturday morning. As we left we found a tiny street market where we bought a loaf of bread so good I still remember it.

Today I’m probably the only tourist in town on a cold Tuesday morning. The shops are all closed and the streets are virtually empty making me feel even more like I’ve taken a ride in a time machine.

My hotel is next to the enormous chateau (castle) that is the primary attraction for tourists who come here. Built in the 11th century and expanded in the 15th century, the chateau today is still entered via a bridge over its very deep moat. Walls enclose the castle grounds which include two smaller chateaux as well as the original and ancient one in the center. The chateau belongs to the city and the town hall is located inside the castle walls. Here’s a link to Wikipedia’s page about this chateau, with good pictures.

Poor picture of the chateau, taken in the rain. Click the link to find better ones.

The large, gothic church of Notre Dame, built in the 14th century, is just steps from the chateau. The south side of the church (that is, one of the long sides) has something rare: an outdoor pulpit built into the wall of the church. It is decorated with some interesting stone carving including one of a head with three faces.

The outside pulpit on an late gothic church. People and animals have been carved on it.

The head with three faces. What do you suppose it represents?

Opposite that wall of the church is a palatial building, once the home of the owner of estates around Vitré. Surrounding all these grand places are the two- and three-story 15th century homes and shops of merchants. Today these places are still homes. The ground floors generally are filled with shops and restaurants but people live in the upper stories. How would you like to live in a 500 year old house – with modern plumbing?

Click here for a bit more about Vitré. And here are some other scenes I caught earlier today to share with you: 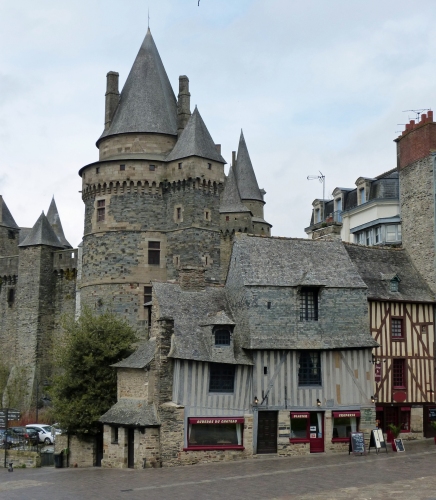 I had lunch in the leaning room of this restaurant below the chateau — crepes, of course! They were good.

I liked this sign: a piper playing from his perch on the moon with a blue bird sitting on his flute. 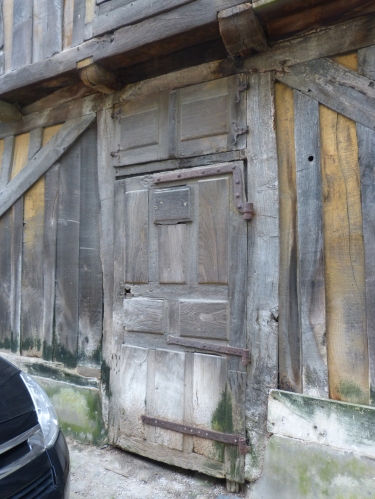 This is the door of a many-hundreds year old building that has NOT been maintained. I can’t recall ever seeing one in this condition and I thought the door was quite interesting. 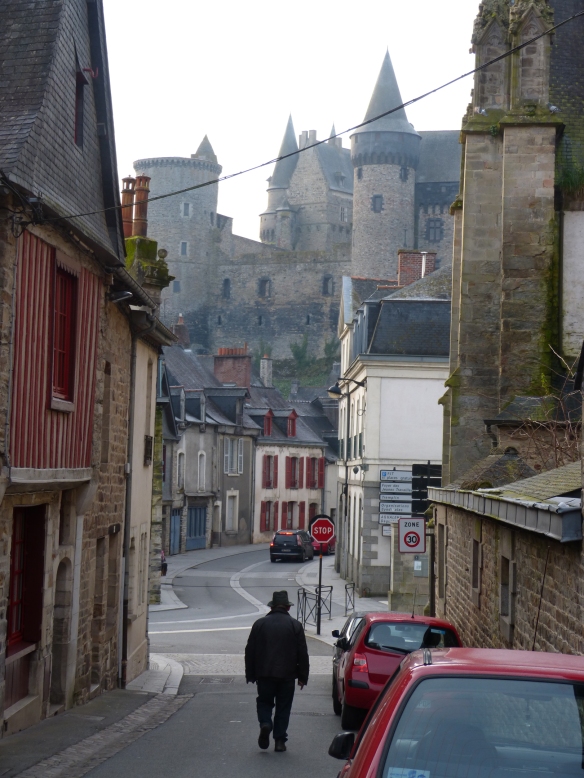 My favorite picture of the day, taken early this morning.