Volodymyr Zelenskiy, the comedian/actor who stars in the program, is also the creator and producer of the series. It would seem that he has used the popular show to advertise his view of what’s wrong with Ukraine and how to fix it. Now he’s the incoming president of the country.

Ukraine is the largest country in size in Europe. Its location has caused it to be taken over by both Germany and Russia (the Soviet Union) over the centuries. I’ve read that 75% of the population is ethnic Russian while ethnic Ukrainians are only a portion of the remaining 25%. Russian is the language commonly spoken here and written communication uses the Russian (Cyrillic) alphabet. Ukraine is the poorest European country with the weakest economy. The Ukrainian dollar today is worth only 3.7 American cents.

You may recall that Russia invaded the Crimea region of Ukraine in 2014. Crimea is almost an island, barely connected to the southern edge of Ukraine near the border with Russia. Although the dispute is not truly resolved the Russians seem to have taken over the area. The great majority of people living there identify as Russian and are said to have preferred annexation. Mr. Zelenskiy campaigned on finding a way to end the dispute diplomatically.

Art Nouveau buildings like this one are seen all over the small city of Odesa.

In 1795 Catherine the Great, Empress of Russia, caused the city of Odesa to be built with an order designed to create an important port city on the Black Sea. Between 1890 and 1910 Art Nouveau was the predominant style in architecture and many other design arts. Also between 1890 and 1910 most of the city of Odesa was built, largely as a resort for rich Russians. The city of Odessa today is filled with Art Nouveau buildings, many of them in deteriorated condition. Restoration and maintenance have caused there to be a sizable number of these former hotels, apartment buildings and retail establishments in good order today. Three in particular caught my eye.  Here’s a look at them: (Blue words below are links to more information.)

The Grand Moscow Hotel
When I arrived at my hotel in Odessa I was astonished by rich appearance of the great, green building next door. I subsequently learned that it had been a grand hotel for Russian visitors during the period around 1900. Google found some information for me about the restoration of this building which has been ongoing since 2014.  The exterior appears to be complete but the windows are all still covered in plastic so interior work is unfinished at this time. (The terms “reconstruction” and “restoration” are used interchangeably in every website I have found about this building’s recent history.)

A postcard image of the original hotel is here 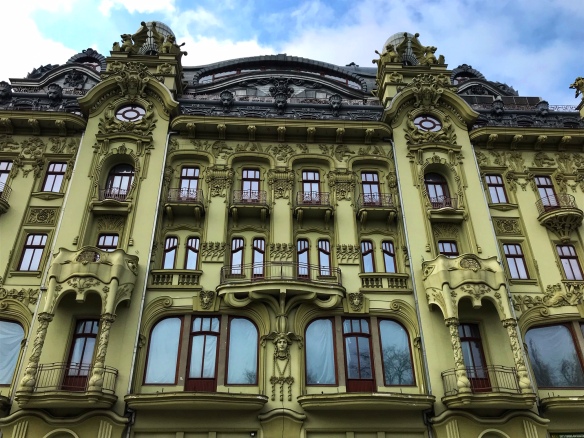 A close-up of the roof decoration featuring griffins. It certainly looks brand new but can it really be?

If you’ve been to Paris you may have discovered the “passages” there which were the forerunners of modern shopping centers. There are number of them. None that I’ve seen there come close in style to the extravagant “Passage” in Odessa. I first walked past it, noting the decorative sculpture above the entrance and nothing more.  Then I found it highlighted on the city-produced tourist map so I returned. I was astonished by what I found there. 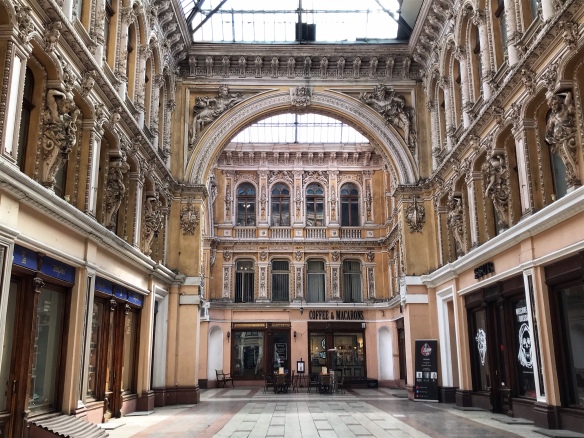 The city of Odessa seems to be most proud of its opera house. It is in the rococo style of the first half of the 19th century, not Art Nouveau. It’s a large horseshoe shaped building said to have excellent acoustics. 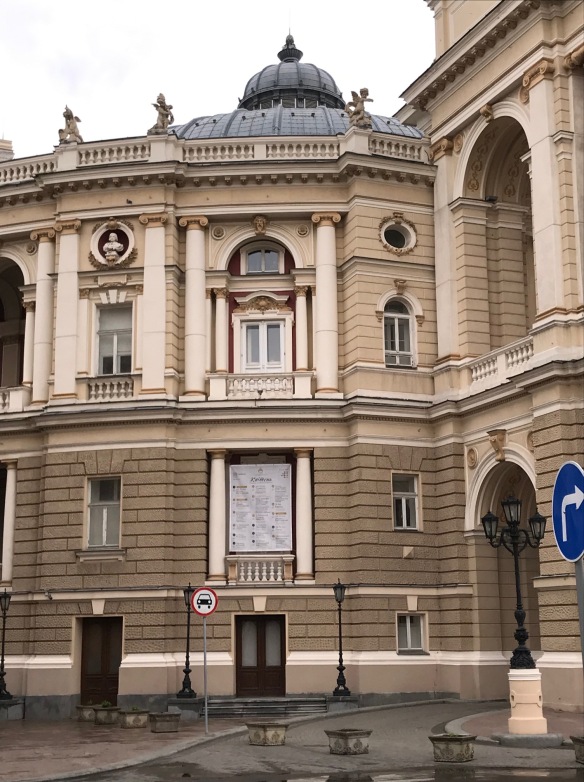 I was not able to tour it so I’ve borrowed a photo of the interior found on Wikimedia Photo by Alex Levitsky & Dmitry Shamatazhi – Own work, CC BY-SA 3.0, https://commons.wikimedia.org/w/index.php?curid=28604603