Zadar Croatia is one of the oldest cities on earth. Founded before 800 BC, by Ilirians, it has been occupied many times over the centuries. Zadar (pronounced Zuh-dahr) retains many artifacts of its invaders, mostly those of Romans and Venetians. The old town is a small portion of the city but its the part of Zadar that attracts many visitors — not just history and old church fans like me but also young people attracted to its beach and party scene in summer.

Old town Zadar feels like being on an island but its actually the tip of a peninsula, a boaters paradise. The main town is reached by a 100-foot-long bridge.

Last evening sitting on a park bench overlooking the Adriatic Sea, watching the sunset unfold, I thought about how lucky I am to be here. Here’s a bit of what I’ve found here. 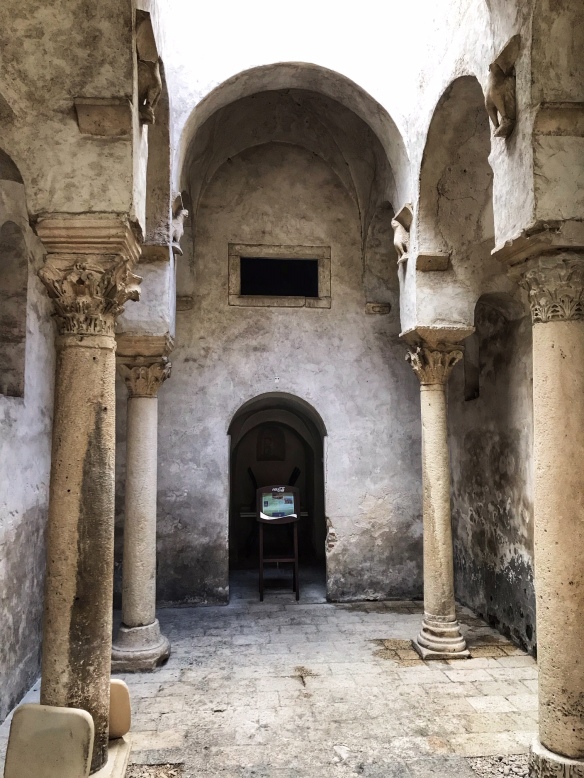 I would never have found this 11th century church had I not taken an excellent tour with professional guide Sime Botica, arranged for me by AirBnB. The columns are “recycled” Roman remains.

St. Anastasia cathedral is one of the purest Romanesque churches I’ve seen anywhere. Built in the years 1100 – 1200 AD, it is small and simple and beautiful.

This view looks across the large collection of Roman stone artifacts toward the Church of Saint Donat. A resident of Zadar told me that this church was destroyed by Allied bombing in 1943 as was about 60% of the old town. The tower in the rear appears to be Venetian and may also have been reconstructed in the 20th century.

A view of the cloisters at the Franciscan church and abbey. 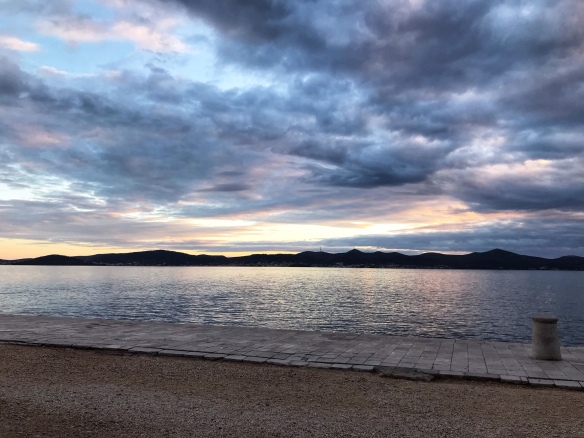 Rain threatened yesterday and the skies were too stormy last night to let much sunlight through, but the sunset here is often one of the best in Europe. Zadar is known for its musical Sea Organ created at the northern edge of the peninsula.

Yesterday 158 members of the U.S. House of Representatives voted against reinstating the Violence Against Women Act, due to opposition by the NRA. When I found this painted bench at the seaside, I had to share it with you. Look closely to read it.