When I began planning the French segment of this trip the December timing suggested a visit the “set” of four cities in eastern France that are famous for their Christmas markets.  That included Metz so I added it to the itinerary and did some reading about it but probably would have ranked it last among the four as it seemed to have the least to offer. While there for a short time this week I discovered a rich, fascinating and historical city that I’d like to return to for a much longer visit.

Metz through the centuries in one photo: the 13th century cathedral, the 21st century Ferris wheel (a holiday tradition in French cities), 20th century buildings and an 18th century gate. 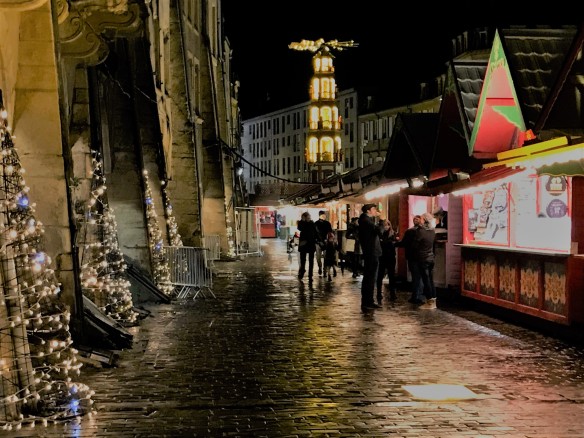 A view of one of the Christmas markets and the medieval arcades next to it, each decorated by a lighted Christmas tree. Note the tall lit structure at the rear.

This is a top piece of a delightful building in the center of the market. It spins, and as it does three layers of characters from a nativity scene appear at each opening. Delightful.

After meandering a while on a cold night, I chose one of several restaurants located in a row of ancient buildings connected by an arcaded passage.  There, in a place called “L’Establi” I enjoyed a huge dinner of beef bourguignon and delicious mashed potatoes. There was much more than I could eat!

A very traditional French dinner and a delicious glass of wine!

The following day, Saturday, I returned to find those markets packed with visitors including Germans, Brits, and Americans as well as many French families. The old market squares are located in the center of a large commercial area filled with small shops and restaurants.  One source says the shopping district in Metz is the largest in France. I soon found my way to the cathedral and the giant Ferris wheel located next to it for the holiday season. The oldest church in France is located in Metz. The city is filled with very old churches, both Catholic and Protestant, and a has a large synagogue.

The construction of the cathedral in Metz began ca. 1220 AD and continued for about one hundred years. It one of the tallest gothic cathedrals in France. It also has the largest expanse of stained glass  windows in the world, nearly 70,000 square feet of glass. The windows date from the 14th century through the 20th.

The very tall nave of the Metz cathedral with a peak at the spectacular glass.

Metz was an ancient Celtic settlement.  Wikipedia says it was settled 2000 years ago; another source says 3000 years. It was from this part of France that the Celts migrated to what is now Ireland, the British Isles and Spain. Wikepedia has a detailed history of the many political changes in the Alsace-Lorraine region over many centuries.  Lying as it does at the point where France, Germany and Luxembourg meet, it’s not surprising to discover that this French region has a strong German background. Following the German victory over France in early 1871, Alsace Lorraine became a part of Germany. It was only at the end of World War I that it was returned to France. It was controlled by Germany again in the early 1940s.

Wikipedia has an extensive article about Metz, detailing its long history.

Rough Guides “Snapshot” guide to Alsace and Lorraine, available on Kindle from Amazon for around $2.

I’m on a low-budget tour so I’ll share the names of affordable places as I find them.  In Metz I stayed in Hotel Kyriad for $57 a night (breakfast not included). The room was small but comfortable and the location was perfect for touring the city.

I bought a tiny, lightweight computer for this trip and it’s giving me a difficult time. My apologies for the delay in updating this blog. It’s not that I haven’t been trying every day!