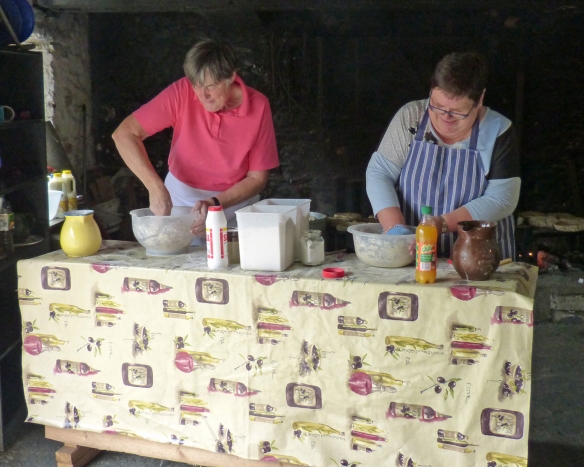 The Irish people – as a group, a culture – are the friendliest, nicest people I’ve ever met. It seems they are all friendly, welcoming and interested in talking with strangers. Many times people who noticed my accent asked me where I’m from. When I said “America” they would then ask “where in America?” Then we’d begin to talk about their trips to the U.S. or their desire to visit my country.

I met the ladies shown above baking Irish soda bread “the way our mothers did” and had a nice chat with them while they continued mixing bread. They were participating in a community fundraiser which took the form of a local fair and “tractor and old car rally.” The proceeds of the event, which was sponsored by their priest, went to an orphanage in Romania and to a group providing clean-water wells in Africa. For years men from their small village have gone to Romania for a week each year to build and repair structures there.

During a trip around all of Ireland this summer I spent one night at a lovely small hotel in Belfast. Áine was the young woman at the reception desk morning and night. She was delightful to my friends and me. She was warm and chatty and helpful, always smiling. I find the people of Northern Ireland to be very welcoming.

A story about my husband’s distant cousin, Mary, whom we met on our first trip to Northern Ireland. Mary had no idea who we were or that we would be calling her but when we did she immediately came to meet us, took us home to dinner, took my husband to play golf at her club, introduced him to her priest so we could learn more about his ancestors, and gave us old family photos sent back to Ireland in the late 1800s. That didn’t all happen in one day but over just three or four days. Mary and her husband have become good friends and have welcomed us and other members of our family warmly many times. I’ve always been really happy to know her.

Louie is the 16-year-old son of the owners of Fruit Hill where I’ve stayed on my last two trips to Ireland. Louis is cute – he has a head full of curly black hair which he has been wearing in a large “afro” but recently changed to a “man bun.” He was always polite to this older American lady. He was very helpful to me this summer, doing any favor I asked. Louis and his brother and sister work hard around their home, clearing brush, cleaning rental cottages and more.

Jerry is one of the guides/gatekeepers at the John F. Kennedy Memorial Gardens and Arboretum. He is one of the friendliest people I’ve ever met. Jerry learned my name on the first day we met. He always greets me with a big smile and a promise to take me on a tour of the garden to show me something special. Jerry once told me that 100,000 people a year visit the arboretum. Being remembered from one year to the next makes me feel very special.

In Ireland I had brief conversations with friendly clerks in supermarkets and retail shops. Rental car agents are always helpful but I remember one young man in Waterford especially for his interest in my travels and my country.  I remember the lady at the table next to mine in a café who struck up a conversation and (before it was done) recommended a perfect place for me to retire to in Ireland. I remember more people than I have space here to tell you about. I love the Irish people. I look forward to returning to be with them again next year.