The star of the show in Buda (the west side of the river) is the great castle on the hill. Built in the mid-1700s under the direction of Empress Maria Thersa of Austria, the castle has its roots in the 1200s. It’s been destroyed and rebuilt many times over the centuries since. A detailed history of the castle and a room-by-room description with old photos is on Wikipedia – click here.

Occupying the ridge at the opposite end of the castle hill is a charming neighborhood of lovely old buildings painted in pastel colors. The cathedral of Budapest is placed between the castle and neighboring residential district.

Below the castle on the Buda side of the Danube there are gracious old apartment buildings in busy neighborhoods.  The apartment where I stayed was built in 1907. My friend’s grandparents bought it in 1947 and it has passed down to her. It’s a large apartment of the grand old style. Three large rooms overlook the city street below. At the rear of the apartment is the maid’s room (now storage) and a tiny original kitchen, obviously designed for a maid as well. Because this apartment has been handed down intact it contains the memories, the artifacts, the style of many decades. I felt lucky to spend a few days there.

Although Hungary was behind the Iron Curtain for much of the 20th century and on the losing side in both World Wars 1 and 2, the people of Budapest continued to preserve the great buildings and neighborhoods constructed when their city was a co-capital of the Austro-Hungarian empire. That pride of place can still be seen throughout the city today. Despite its difficult past, there is a charm to Budapest that many modern cities have lost. As with many places that were once behind the Iron Curtain, the damage inflicted during bombardments during the 1940s was repaired long ago and the gracious style of the late 1800s can be seen throughout the city today.

I hope the pictures I’ve shared here will give you a bit of the sense of beautiful Budapest. 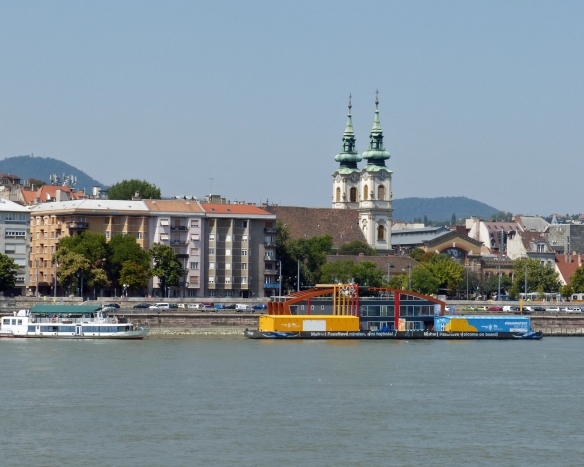 Old meets new on the Danube

This is where my friend A. attended grammar school. It remains a school today. It was originally a convent.