If you’ve seen a travel guidebook about Hungary chances are you’ve seen a swimming pool at the Gellért Hotel on the cover of the book. There are not many hotels in the world featured on the cover of guide books; not many with names recognized by international travelers. The Gellért is one of that select number. The history of the hotel is a story of destruction and interruption during the wars of the 20th century and rebirth during the Soviet occupation. Wikipedia’s article about the Gellért provides a good, brief history.

The hotel is obviously grand but it’s the spa and its swimming pools that attract attention and draw people from everywhere. I’m borrowing from Wikipedia a description of the spa at the hotel: “Hotel Gellért is famous for its thermal baths. The Gellért Spa, connected to the hotel directly, is a special attraction and its indoor and outdoor swimming pool, wave bath, sunbathing terrace and thermal spa can be used by the hotel guests [and the public]. Thermal baths are used for healing different diseases and illnesses. Jacuzzi with its glass roofs, which is opened in the summer, and the wave bath are the favourites among guests.”

Although I didn’t stay at the Gellért Hotel I was able to walk into the art deco interior of the spa and to snap some pictures, indoors and out.

If you have the opportunity to visit Budapest, grab it! If you’re considering a river cruise on the Danube, make a point of beginning or ending here. If your time there will be outside the summer season, look into staying at Hotel Gellért. It’s location in the center of the city is perfect for touring fascinating Budapest.

This is a view of the spectacular entrance to the famous indoor pool at the spa. Above the area shown here is a gorgeous stained-glass dome.

This is the best picture I could get from the closest point to the famous indoor pool.

But this borrowed photo shows you how fabulous this place is!

By poking my camera’s lens through rails on a fence I was able to capture this scene of the outdoor pool area on a very hot day. 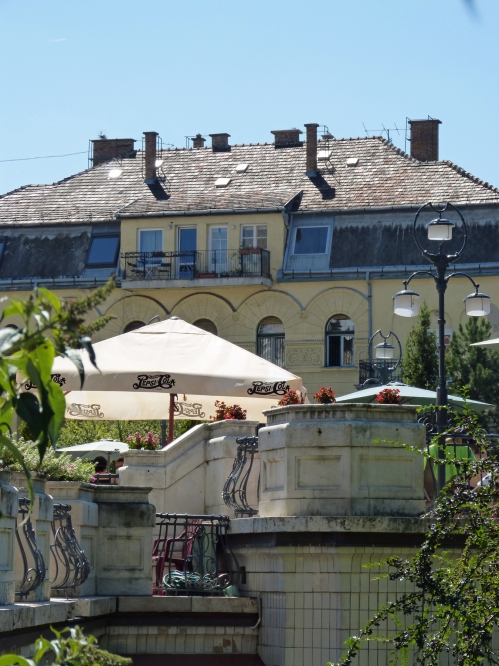 No one from New Bern NC (birthplace of Pepsi) could skip this shot, also taken from the other side of the fence.