Near the place where I am staying this summer in County Wexford, Ireland, is a small peninsula called “Hook Head.” Abandoned old homes and churches are found often along the narrow roads that lead to the end of the peninsula and Hook lighthouse. The lighthouse is the second oldest functioning light in the world. It was built around the year 1200 on the orders of William Marshall, a member of the English royal family whose name is connected often with the history of this region.

Here are a few of the many photos I’ve taken on the Hood peninsula. I hope they will tempt you to visit southeast Ireland.

The coastline of the peninsula is rugged, cut deeply. It’s a popular area for biking, hiking, and kayaking.

Just a mile or so before the end of the peninsula and the lighthouse is a tiny village comprised of the remnants of very old houses and some lovely new homes. The road is narrow and lined with flowers, some naturally occurring wild flowers and some planted by people whose homes are along this road.

This house is slowing being taken back by nature. It’s next to the house shown above and directly across the road from the church ruin in the next picture.

This church is likely the ruin of a very old monastery, known to have been created here ca. 500 AD. The Knights Templar were in this area in that era and are believed to have installed a monastery here. The site noted below provides a simplified history of this region that explains this in more detail. 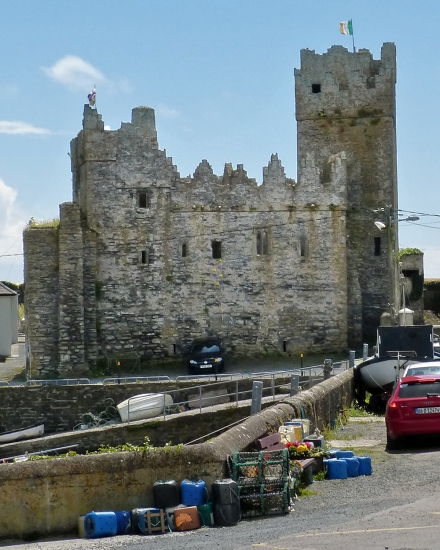 A mile or two from the lighthouse is a tiny village called Slane which is the site of this medieval castle. It is not the only castle on the peninsula but it is the most complete.

Just in front of the castle in Slane is this small protected harbor. 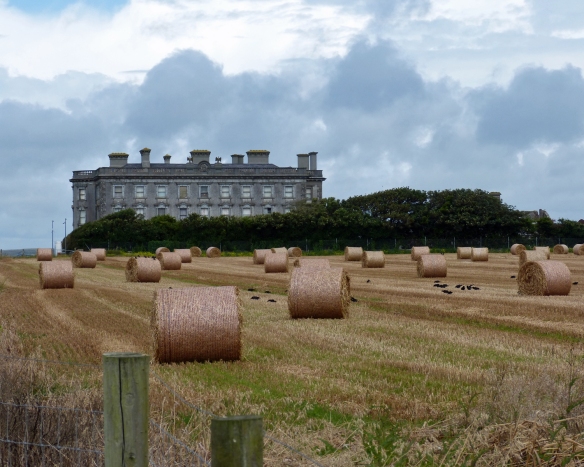 Loftus Hall is a bit farther up the peninsula. It’s been abandoned for a long time. The current owners are slowly working on restoring it. Today the grounds are being used as hay fields. All over Ireland in July these huge rolls of hay are harvested and piled up on slow-moving tractors for removal to winter storage places. (Wish you’d seen the piles on the tractor wagon I saw yesterday!)

P.S.  Tintern Abbey and Colclough Gardens (which I wrote about here very recently) are also on the Hook Peninsula. In New Ross, the nearest large town, a project of depicting the history of this region and William Marshall in original tapestries has been ongoing for more than ten years. Read about it in this post I wrote last year:

This is a simplified but good site for learning about the history of this area.  Read more about this area here and here (this site has a video)

This is NOT a picture of your friendly photographer: