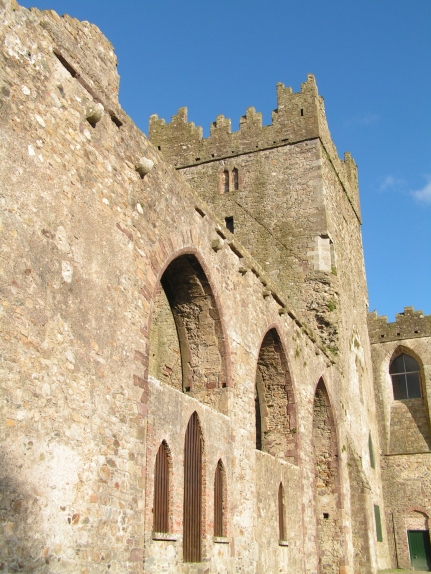 Ireland has a great many abbey ruins that date from the 12th and 13th centuries. At one time the monks living there were very wealthy, very pious, very close to Rome. When Henry the 8th dissolved the abbeys and persecuted the monks, the great estates and the monastery buildings were given to important Englishmen who had been loyal to the king. Tintern Abbey in County Wexford, Ireland, was one of the richest and largest of the abbeys. Today much of the original building survives.

You may have heard of Tintern Abbey because of the famous poem by William Wordsworth, and if so you may be confused because you think it’s in Wales. There are, in fact, two Tintern Abbeys. The Welsh abbey is older and larger and much better known.

A view of Tintern Abbey as it stands today, after much restoration work by County Wexford. The large window space filled by wood painted gray would be much nicer filled with glass.

There’s a very good history of this place on a site called Megalithic Ireland dot com. Because I think the creator of that site likes to share Ireland’s history liberally, I’m going to quote liberally from that site which tells the story of Ireland’s Tintern Abbey much better than I can.

“The first Cistercian abbey in Ireland was established at Mellifont in 1142, but it was not until the early part of the 13th century that the abbey at Tintern was founded. The Anglo-Norman Knight William Marshall, first Earl of Pembroke, was the patron of Tintern Abbey in Monmouthshire, Wales. On his return to Ireland, with a new title, Lord of Leinster, his ship ran into a storm. Marshall vowed to establish a monastery wherever he landed safely. After landing at Bannow Bay in Wexford he bequeathed 3,500 hectares of land for the foundation of a Cistercian abbey. The abbey was named after the one in Wales and also colonised by monks from there. To distinguish them from each other, the abbey in Wales was known as Tintern Major and the Irish one, Tintern de Voto-‘Tintern of the vow’.

“The abbey was built to the usual plan for Cistercian monasteries. The church was originally cruciform in shape with small chapels in the transepts for private prayer. What we see today are the central aisle of the nave, the crossing tower, the chancel and the Lady Chapel, which was part of the south transept. The rib-vaulted chapel was originally divided into three separate chapels by screen walls. All these structures date to the 13th century when most of the original buildings were replaced. Like most monasteries very little remains of the cloister or the domestic buildings. There is a corbel table on the the north and south walls of the chancel. This table features 18 grotesque head carvings, some of the heads that appear on the south side of the table are pictured below.

“Shortly after the dissolution of the monasteries in 1536 the abbey and it’s lands were granted to Anthony Colclough, an officer in Henry VIII’s army. The Colclough family converted the tower into a family residence. One of the upper rooms was divided up using a heavy oak framework that was infilled with panels of wattle (Woven sticks)and daub (Mud). Oak panelling or wainscotting, popular in the 16th century, was also discovered during conservation work.”

At the abbey there’s a display of drawings that illustrate how the abbey changed over the centuries. This one shows what a grand home the Colclough family made of the abbey.

Tintern Abbey became a very grand home. Members of the  Colclough (prounced Coke-lee) family lived here until 1959. There are excellent photos of the abbey on the website being quoted here. The photos on this blog are mine.

There are two other good reasons to visit Tintern Abbey in Ireland. I’ll tell you about them in my next two posts.