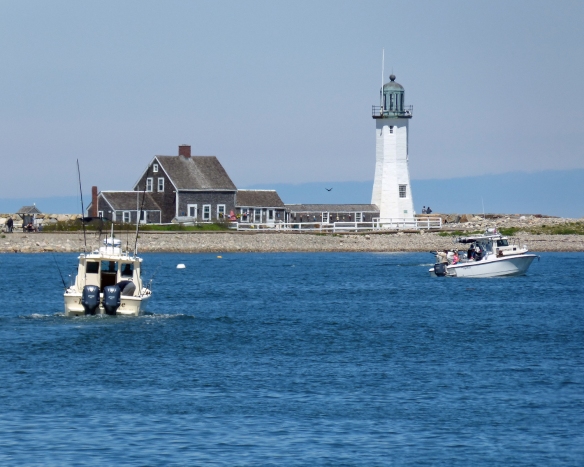 I love the small New England town called Scituate – pronounced Sit-chew-it, said very quickly).  It was home to my family during the years when our sons were growing up. Looking back, I think I probably didn’t appreciate it then as much as I do now. We moved away nearly 20 years ago and I don’t return often, but recently I spent a week there and enjoyed every moment.

Scituate lies at the corner of the Atlantic Ocean and the North River. It is exposed to the worst Nor-Easters (bad storms) because it’s on the southern point of the large “C” formed by Boston Harbor. You may have seen it on television – the Weather Channel seems to always post a reporter in Scituate when a big storm threatens New England. Some of the storms have been very destructive and occasionally deadly.

The 18th century Cudworth house and barn (shown here) are part of the Scituate Historical Society’s property and are open often for touring. They abut the town green and are across the road from the Unitarian church, Scituate’s first church.

Scituate was settled not long after Plymouth. It’s famous “Six Men of Kent” England arrived in the 1620s and settled near Satuit Brook, which gave its name to the town. Satuit is a Wampanoag Indian word meaning “cold stream” – the water here is chilly indeed! The town became a legal entity in 1636 and is said to be the second oldest town in Plymouth Colony. 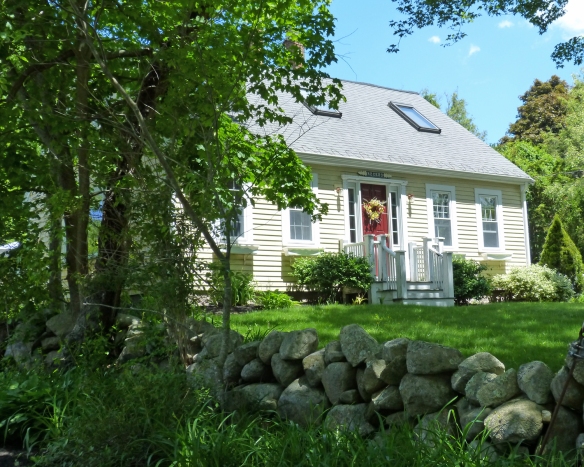 A typical old but updated home in Scituate. The tumbledown stone wall, like the one in the foreground, is commonly found throughout the town.

Once called the “Irish Riviera” Scituate in the late 20th century was home to many large Irish Catholic families. One British newspaper called it the “most Irish town in America.” It’s a small town with a year-round population around 18,000. Geographically it seems larger because it’s spread over several miles. Gently rolling hills are laced by very old roads with names such as “Country Way.” The town is graced by many homes that date from the 1700s and 1800s. The oldest house in town, built in the 17th century, has housed an excellent restaurant called the Barker Tavern for many years.

Scituate is lined with beaches. The best, shown here, is probably Minot beach in North Scituate. Great for sunbathing but the water is icy! Minot light is shown in the distance.

There are two principal commercial areas. The larger one lies at the water’s edge and so is referred to as “Scituate Harbor.” There are several good restaurants there as well as a good small hotel. The northern end of town has its own small business district with a number of shops and eateries. There are two lighthouses. Scituate Light is on the beach at the entrance to the town harbor while Minot Light stands on a rock in the ocean about where Scituate meets Cohasset.

Commercial fishing was one of Scituate’s main industries for centuries. The picturesque fish pier still serves a small number of fishermen.

Today Scituate is a mix of new and old. Many new streets have been created to accommodate large new homes.  In recent years the commuter train from Boston was rebuilt (the original having been closed in the 1950s). One rail line now ends in Scituate. It’s brought new residents and increased real estate prices.

The beach areas are lined with old summer cottages that have been “winterized.” Many of them are available for rent and made a good base from which to explore the South Shore, Boston and Plymouth. I found a good place to stay on AirBnB.

We have one more stop to make on our South Shore tour: Marshfield and Duxbury are next.