Hingham is the furthest north of the South Shore towns and Cohasset is just to its south. Both of these beautiful places have long been upscale residential neighborhoods for Boston commuters. Riding a ferry to work in Boston is a great way to begin the day.

The main road through Hingham (shown above) has been called “the most beautiful Main Street in America.” A carefully managed row of 18th and 19th century homes and churches line both sides of the street for several miles.

Hingham’s best known landmark is the Old Ship Church created in 1681 by shipwrights. It’s name comes from the interior roof beams which look much like a ship’s hull. It is the oldest church in America to be continuously used for worship. 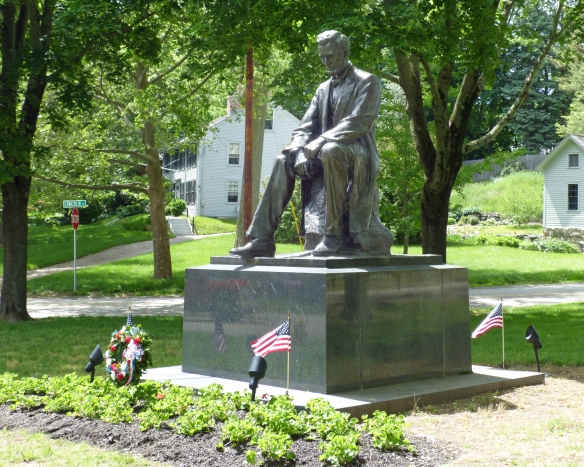 Abraham Lincoln’s ancestors made their first American home in Hingham. The town fathers long ago erected a statue of the president as a memorial and a reminder.

The home of Samuel Lincoln, the president’s ancestor and one of the original founders of Hingham, was built in 1649.  It is well preserved and remains someone’s home. 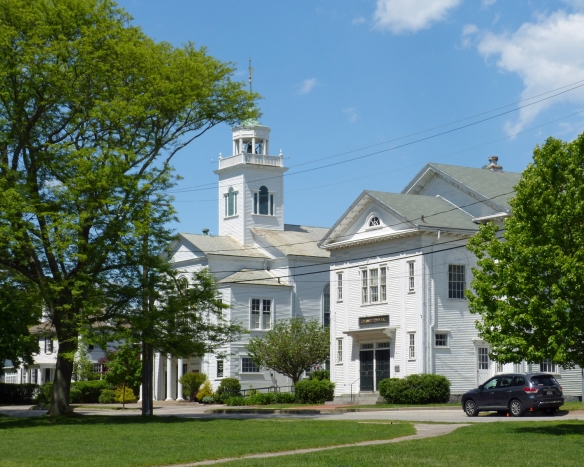 The town of Cohasset is just to the southeast of Hingham. A small town in a perfect location near the sea, it has been an enclave of the well-to-do for many years. The center of the town is a classic, oval New England green, lined by old white houses as well as two churches, the town offices and a meeting hall. The historical society is housed nearby, assuring that the modern era doesn’t creep into the village center.

Not far from the town green a charming mercantile block provides good food and other services to the community. The Red Lion Inn proudly proclaims its founding in 1704. Across the street a charming bakery/café called French Memories is celebrating its 25th anniversary.  Either of these is a good choice for lunch as you make your way south along the Atlantic shore.

Minot Light seen from the beach in Cohasset.

Cohasset has a long shoreline. For more than a century large mansions have lined Jerusalem Road and Atlantic Avenue overlooking a white sand beach. Originally summer homes for Boston’s elite, today these grand houses still stand proudly above the sea. At the north end of the beach there’s a cluster of small, once-affordable beach houses.

In my next post I’ll tell you about my home town in this beautiful region, Scituate.

Have you been to Boston’s South Shore?  Have you lived there?  Do you miss it as much I always have?  Please leave a comment below.