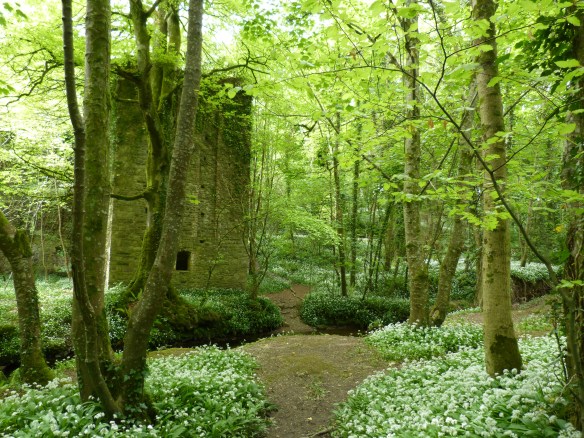 I’m returning to Ireland for the summer if all goes as planned. I will be there for three months staying at Fruit Hill, the old farm with rental cottages that I enjoyed so much last year. It was so hot in New Bern last year that in August I wrote to Susan, the owner of Fruit Hill, asking to book the smallest cottage for three months in 2017. Ireland’s weather is much the same throughout the year: neither too hot nor too cold – often “just right.” 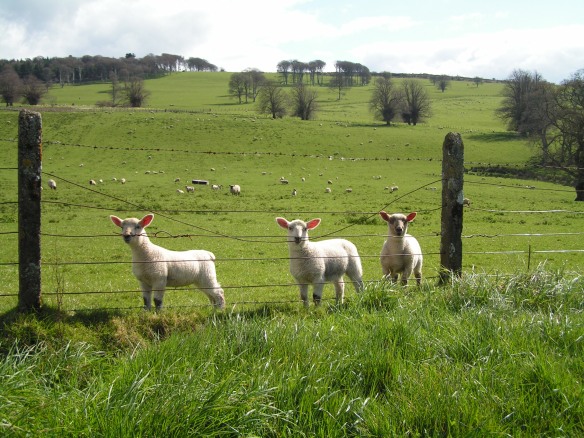 Springtime is Sheep Season in Ireland

Several people have asked me about trips to Ireland recently. More have said, “I’ve never been to Ireland but I’ve always wanted to go there.” This is a great year to go and spring is the perfect season. The euro has fallen against the dollar, down to about $1.06 this morning. Airfare is much lower to Europe for the coming summer. I plan to fly from Boston (I have family in New England) to Dublin on a new airline called WOW and my summer round trip fare is only $609! Wow! 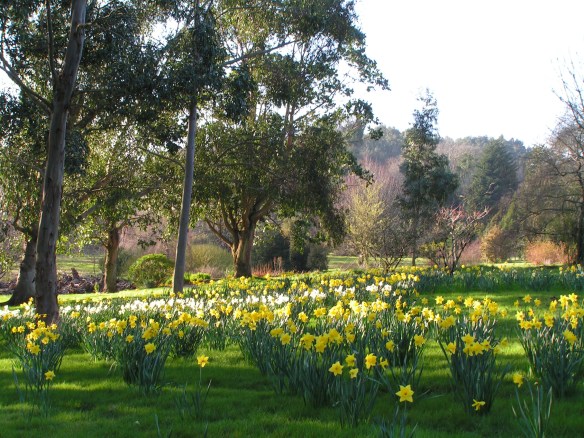 Thousands of daffodils bloom in the JFK Gardens and Arboretum.

Both the beauty of the green isle and the friendliness of the Irish people call me back to Ireland. This will be the third time I’ve gone there for a months-long stay. There is an old-fashioned comfort that makes it very easy to just be there. The narrow roads in the countryside are surrounded by low green hills. The network of newer highways make it easy to visit distant parts of Ireland. Last year I drove from the southeast corner to visit our cousins at the top of Northern Ireland in just four or five hours – it’s a small island.

Wide beds of narcissus bloom in the beds in front of the old mansion house at Altamont Gardens, now owned by the Republic of Ireland.

The combination of history and good growing weather have endowed Ireland with many ancient gardens. For centuries the British made Ireland a colony. A few wealthy men controlled the island and built grand estates. They benefited from the exploration of the world in the 18th and 19th centuries financially and also by arranging to receive seeds and saplings from around the world for their formal gardens. Today you’ll find 160 foot tall California redwood trees and “monkey puzzle” trees from Chile as well as 50 foot wide rhododendrons from China. The cool, damp weather of the north Atlantic is perfect for nurturing many species of plants. Irish people plant daffodils in every available spot and from late January through late spring they bloom everywhere.

Huge, ancient rhododendrons blooming at Woodstock, an old estate garden in the village of Inistioge.

I am particularly fond of the John F. Kennedy Memorial Garden and Arboretum near New Ross. You can read the blog posts I wrote last year about it, about Fruit Hill, and about the Irish gardens I love here:

Click “Ireland” in the contents cloud at the top right corner of this blog to find all my posts about Ireland.

The photo at the top of this post was taken beside Ireland’s Tintern Abbey on a walk in the woods on a spring day. The path leads past an ancient Irish castle along a stream lined with millions of bluebells and wild garlic flowers.