Upon entering the village called Conques in southern France the visitor enters the middle ages. Located high on a mountain in the region of Aveyron, Conques (pronounced Konk) has remained virtually unchanged for centuries. The village is thought to have been founded by a hermit named Dadon in the 6th century A.D. but it may be much older. A small abbey grew in the place where Dadon lived. To become successful medieval abbeys needed to possess an important relic to draw pilgrims and their wealth. At Conques, the “draw” was the remains of Sainte Foy.

In the 9th century a monk from Conques was sent on a mission to the abbey in the distant town of Agen where he acquired (by nefarious means) the remains of the young Christian martyr named Foy (French for “Faith,” pronounced “fwah.”) It is believed that Sainte Foy was tortured to death ca. 300 A.D. for refusing to denounce Christianity. It was said that her remains were miraculous. Many pilgrims journeyed to Conques to pray to Sainte Foy and to leave gifts of money, precious metals and jewels to her. Over time the abbey became wealthy.

Click on this photo to see an enlarged view. One of the links at the end of this post provides a detailed description of the sculpture.

In the early 12th century the abbey church that is the center of the town today was built. The abbey lies on one of the pilgrimage routes from Paris to Santiago de Compostela in northwest Spain. It is built solidly of blocks of golden stone. There are two bell towers flanking the door. Today the abbey is best known for its tympanum, the sculpted decoration above the main entrance. It’s believed to have been created ca. 1150 A.D. Traces of centuries-old paint can easily be seen on the sculpture. The photo below will show you its intricacy and a link at the bottom of this post will explain the meaning of the images.

The interior of the abbey church in Conques.

The interior of the Romanesque abbey church is comprised of three narrow aisles. The center one, the widest, leads to the main altar. The nine-hundred-year-old columns are each topped by ancient sculptures of people and animals. Outside a cloister provided shelter to the monks as they made their way from their accommodations to the church for prayer several times a day. Today it leads to the treasury where many golden gifts left behind centuries ago are displayed. The principal relic is the golden sculpture of Sainte Foy which is believed to hold her remains. It is 33 inches tall and has many precious stones attached. (It’s not permitted to take photos of the reliquary of Ste. Foy. For this post I’ve borrowed the one shown here from this site.)

This sculpture, believed to represent the builders of the church, always makes me think of the early Beatles.

Today the village (population under 1000 people) hosts thousands of pilgrims and hikers as well as many tourists. A book entitled The Little Saint by an author writing under the pseudonym “Hannah Green” first drew my attention to Conques. Ms. Green wrote about her summertime visits there in the 1970s, describing the people of Conques and her explorations in the hills above the village.

Houses are stacked one above another on a hillside. One street just wide enough for automobiles winds through the village but all the other “streets” are simply ancient tracks twisting past houses that are hundreds of years old. There is a large hostel for pilgrims only, a small hotel and some “chambre d’hotes” (French for a B&B). We stayed at the original village hotel where we enjoyed a fine dinner and a lovely room overlooking the surrounding mountains. In the morning we wandered through the village as the sun came up and made an early purchase in the boulangerie (bakery) across from the hotel.

For me, visiting Conques was an accomplished travel goal. I thoroughly enjoyed my time there and hope to return one day. 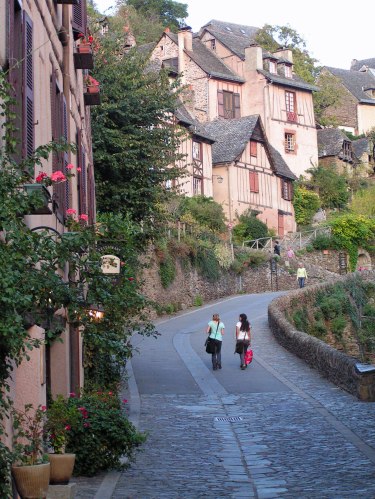 Images and a description of Conques from the association of Most Beautiful Villages of France.

Another very good online tour of Conques and its church.

A very detailed description of the abbey church and its sculptures by a professor of art history.

A link to the oldest hotel in Conques, where we enjoyed staying.

3 thoughts on “The Most Beautiful Villages of France: Medieval Conques”