Earlier this week I went to the top of Ireland, to the northeast corner known for the Giant’s Causeway. Molten lava from an extinct volcano many millennia old has formed columns of stone in (usually) hexagonal shapes. Because this corner of Ireland is just 16 miles from Scotland, it is sometimes said that the “causeway” is nearly a bridge to Great Britain. 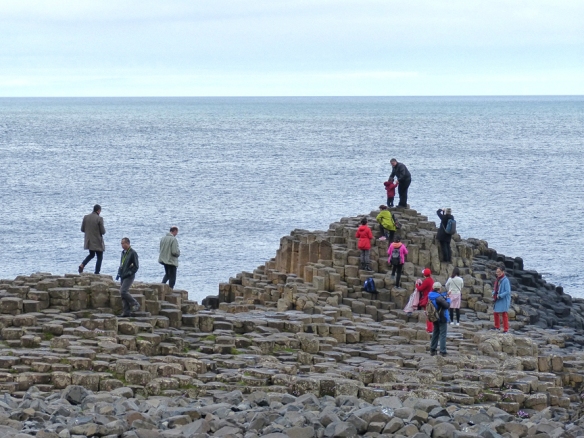 Tourists love to climb the rocks by the sea that comprise the Giant’s Causeway and to have their pictures taken there.

Tourists arrive by the busload to visit this area, drawn by the Giant’s Causeway and the charming villages near the coast and the great, wide beaches. Having seen these places previously I went there to visit our cousins who live nearby. Mary and Eddie have welcomed me with generosity and grace each time I’ve turned up. They are the first people I think of when I tell someone that the Irish are the nicest people on earth.

Here are a few photos of the northeast corner of Ireland. This country is small, only 300 miles from top to bottom, so it’s easy to plan a drive around the whole island that includes a visit to the Causeway Coast.

This is part of the Ballycastle Marina, located on the eastern side of Causeway Coast. The drive from the town above down to this spot involves five or six hairpin turns.

Mussenden Temple has overlooked a wide beach on the northern edge of Ireland since 1785.

Another view of Mussenden Temple with the beach on the eastern (County Antrim) side of northern Ireland coast. The beach is very fine but the water is cold and the skies are often gray. Nevertheless, the Causeway Coast is a natural wonder that’s well worth the drive.

1 thought on “The Causeway Coast”