Killarney is a joyful place once more! Probably second only to Dublin in number of visitors, five years ago Killarney was a victim of the Great Recession in America and the Irish debt crisis. Now visitors have returned. Many large tour buses bring people to the hotels, restaurants and shops of the city.

The band we enjoyed hearing and watching on in Killarney.

Buskers are on the streets making people happy with their cheerful music. We found a four-piece band playing Irish jigs that drew a large crowd and inspired people to dance in the street. We also enjoyed listening to and conversing with an excellent singer called “Scottie” — especially when he played his Donald Trump song! Traditional Irish music is played in many Killarney pubs and on the streets seven nights a week.

The castle remains behind The Lake Hotel in early morning light.

Bee and I stayed at The Lake Hotel, a classic hostelry more than 100 years old. This very large hotel bills itself as “the hotel with the most beautiful view in the world.” I agree. I love staying here. The rooms are large and overlook the lakes of the Killarney National Park and the mountains of Kerry. The remains of an old castle on the lake’s shoreline creates a magnetic focal point for visitors and photographers. 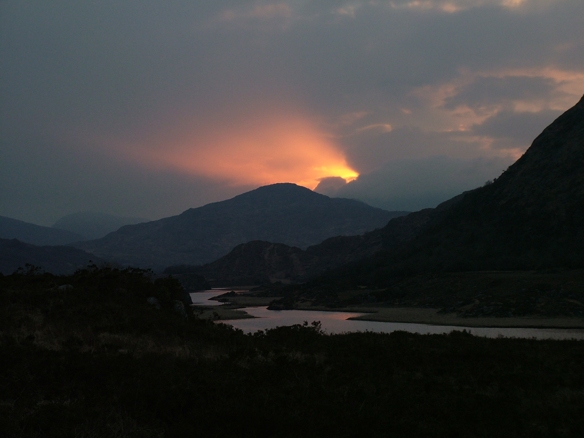 Agi Risko shot this beautiful picture of Ladies View when we were in Killarney together in 2005.

We spent most of one day touring the Ring of Kerry on a bus from Deros Tours. Our driver, Michael, was excellent. He drove carefully. He was knowledgeable about the many interesting places we passed, and good at keeping us entertained with jokes and history. He made sure not to leave anyone behind. At €22 per person for a seven hour ride, it’s a great deal. Our tour bus with 55 seats was almost full. The tour ends with a stop at Ladies View, made famous by Queen Victoria’s ladies-in-waiting in the mid-1800s. (See gorgeous pictures and learn more here.)

One of the collies herded the sheep down the hill.

Our favorite stop on the tour was at Kells Sheep Dog Trial where we watched border collies perform their duties. Incredibly well trained, the dogs respond from 100 yards away to very low commands and short blasts from a high-pitched whistle. They manage herds of sheep better than people can. It was fun to watch them. I think most people agree that this is the best part of the tour. Someone has put a video on YouTube of the same place we visited.

Now is a great time to visit County Kerry!

5 thoughts on “The Most Beautiful View in the World”