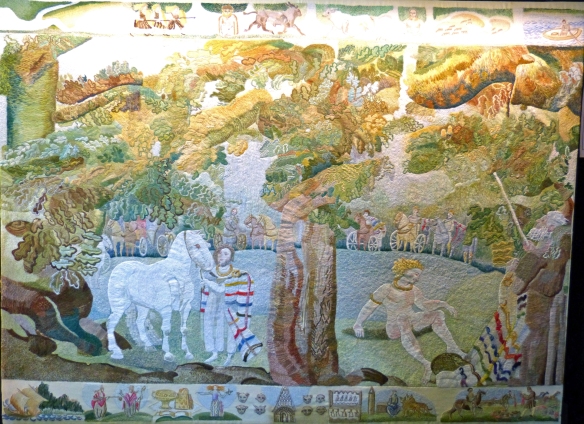 In 2007 the city of New Ross, Ireland, celebrated its 800th anniversary. One activity that occurred in conjunction with the anniversary was the creation of a series of 15 tapestry images that tell the very early history of the town. Actually begun in 1998, the project is nearing completion today. One hundred and fifty women have participated in stitching these panels which are six feet by four feet in size. Yesterday I visited the exhibition space for the Ros Tapestry and spoke with the two docents.

The image above is the first in the series and represents the Celtic world that was Ireland before the arrival of the Normans (Vikings from Normandy France) and the later arrival of the king of England. A link at the bottom of this post will lead you to the website for the Ros Tapestry project where you can see all the tapestries and read the full story of the meaning of each one.

Here are a few photos I took that will allow you to see the fine detail of this work. Click on the photos to enlarge them on your computer. 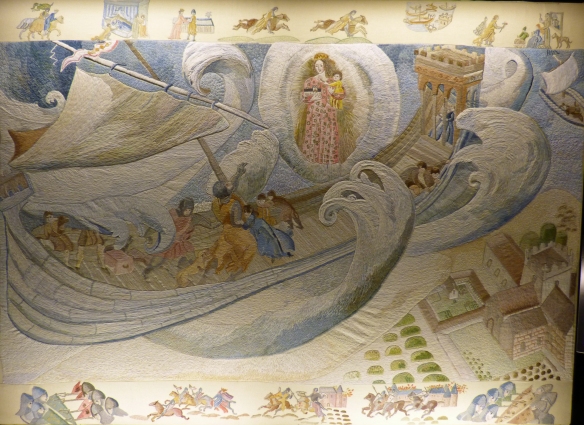 Panel 9: William Marshall crossing the stormy sea to Ireland, dreaming of his bride-to-be and of the kingdom her dowry will grant to him. He is said to have promised God that, if he survived the journey, he would build the abbey which is mostly still standing today and which we call Tintern Abbey (named after the older one in Wales.) 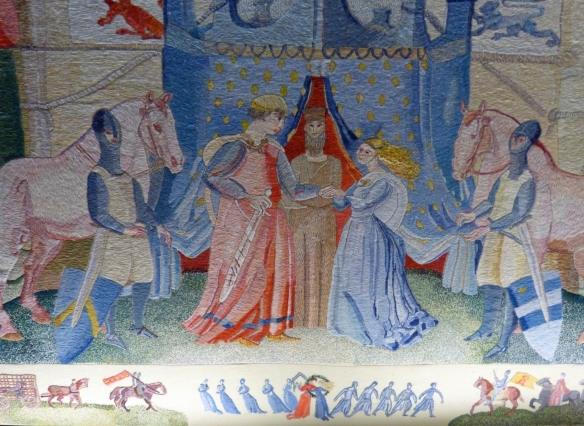 Panel 7: the marriage of Isabel de Clare, heir to the kingdom of Leinster, and William Marshall. 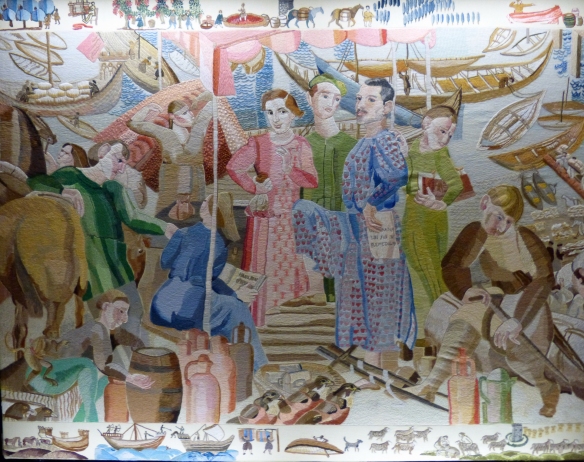 Be sure to notice the borders which were inspired by the famous Bayeux Tapestry. Each one expands the account related in the large central image. On each tapestry the women who stitched it embroidered their names in the space below the bottom borders.

The project’s website provides detailed information about the panels and the historical events portrayed in the tapestries as well as better images. Find it here. Note: the website’s images of the panels includes the story portrayed on the right side of the image but you must page down to find it; the text is dropped to the bottom of the space on the right side. Sometimes clicking on the image of a tapestry leads to the description of another panel. Using the numbered list at the left works better than clicking on the images.

The women who created these works of art and those who led and supported them are to be congratulated for their fine act of civic pride. May their work last another 800 years!