I’m so happy to be back in Ireland! And I’m lucky to be here in the springtime when flowers bloom everywhere, leaves pop out on trees and the green island is at its greenest. The natural beauty of Ireland is enhanced by its location in the north Atlantic protected from the coldest weather by the jet stream. The weather here is always mild and sometimes surprising. I have been in Dublin on St. Patrick’s Day when the temperature was 75 degrees and I’ve been there on the 4th of July when it was 53 degrees.

My husband George and I spent four months in Ireland, January through April 2005. We thought we might want to live in Ireland and came in the winter to learn more about life here during the darkest, coldest part of the year. Because it’s so far north Ireland has long winter nights and long summer days. Already, in mid-April, the sun rises at 6:15 and sets after 8:30. We loved this beautiful small country and its friendly people but for personal reasons we decided to remain in North Carolina. I’ve come back to Ireland as often as I can since then, sometimes bringing groups on tours and sometimes with my family. There’s no nicer place to be. 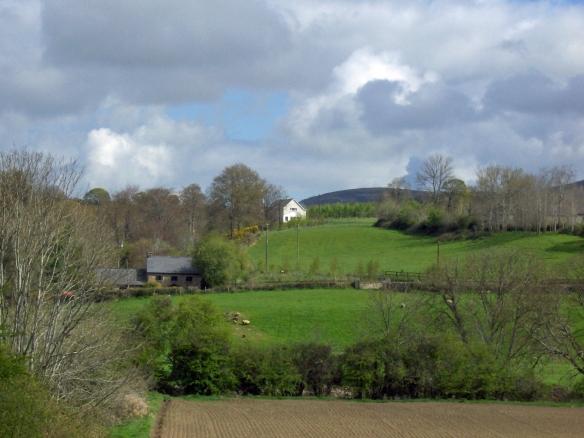 The green hills of Ireland are found throughout the island.

Southeast Ireland is a land of rolling hills, green grass, old cottages, beautiful gardens and sheep! A village called Inistioge straddles the narrow highway that leads west toward the highway to Dublin. It is (in my humble opinion) the most beautiful village in the world! Closer to my temporary home is the John F. Kennedy Arboretum begun to honor the memory of our president soon after his assassination. It is on the same narrow old road where JFK’s great-grandparents farm is located and about a mile from the church where they are buried. Kilkenny, called Ireland’s “medieval city,” has a 13th century cathedral standing guard at one end of the main street and a castle at the other. Gardens! Ireland’s history and climate combine to create some of the world’s most beautiful gardens – it’s the true reason for my springtime return. I’ll be sharing words and pictures about all these places and more with you during the month ahead.

Inistioge – a beautiful village in Ireland

I hope you’ll join me, whether you love Ireland as I do or it’s new to you. I hope I’ll be able to show you this beautiful small country well. Have you been to Ireland? If you have, please use the “Comments” option below to share your experiences here.

4 thoughts on “Returning to Ireland”