Ancient Cambridge has many grand, centuries-old buildings owned by the “colleges” that make up Cambridge University. Its size is small but it’s filled with the energy of the young people who fill the streets. It may be ancient but it is a forward-looking place. New buildings are rising on the outskirts and to some extent in the city proper. There are many parks and other green spaces. Fifteen museums are listed on the tourist office map including the important Fitzwilliam Museum which has an excellent art collection. Here are a few scenes captured yesterday between April showers.

The first picture I took was of young people playing sports in the very heart of the city.

Spring is in the air! Note the old stone street gutter, the French-style roof, the ancient churches. 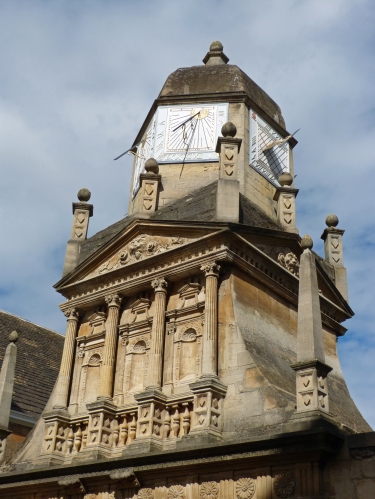 I saw several sundials. The oldest of the colleges dates from the year 1248.

Musical performances are advertised by posters hung on fences and displayed on walls and doors. This is the home of the King’s College Choir.

A daily market fills a large lot in the very center of town. I was surprised to find it still very active at 5:00. Most outdoor markets in Europe close by 1:00 pm.

Among the shops that line the streets there are many more old and traditional businesses than chain stores. There is a multi-story shopping mall in the center of the city which seems to have collected the national chains. I was surprised by this: the city library is in the mall! When I asked a librarian whether that occurred because the developer wanted the library’s site he said that’s just what happened. The result is a new 3-story public library with more patrons.

Here’s another example of how old some of the merchants are: note the date of founding of this haberdashery.

Cambridge takes its name from the river Cam which flows gently around the center city, behind a number of the colleges.

This is the famous “Mathematical Bridge” surrounded by “punters” taking visitors on boat tours on the Cam. The “punts” are low and flat, and are poled by people who look like gondoliers. 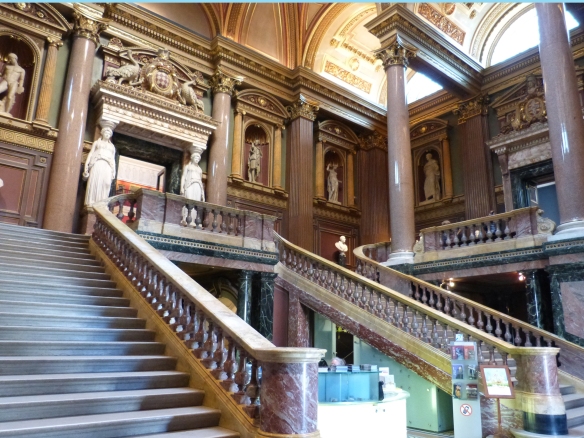 The Fitzwilliam Museum is celebrating its 200th anniversary this year. Its collections range from large holdings of pre-Christian artifacts to Picasso paintings. The collection of classical paintings from Italy and Flanders fills several large rooms and includes works from nearly every famed artist.

Yesterday I wandered from 9:00 to 5:00 and didn’t see half of Cambridge, small though it is. Today I’m going back for more. (Did I mention that Cambridge seems as filled with bicycles as Amsterdam?) 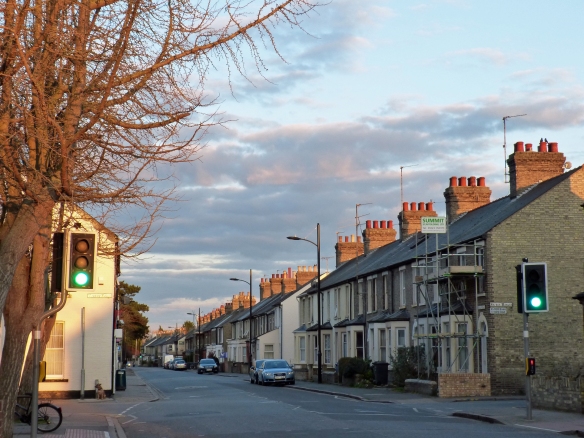 As I walked back to my B&B in the late afternoon the setting sun was highlighting the large chimneys of row houses along Mill Street. I’ve been noticing the chimneys throughout my time in England. Each chimney pot is linked to a separate fireplace inside. I think every room must have one. 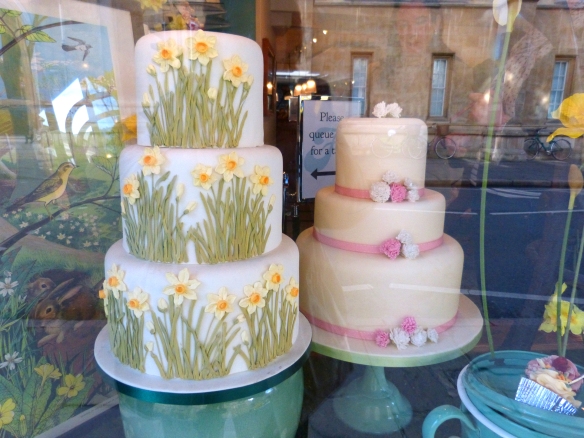 This picture is for Skyla. When I saw these springtime cakes in a bakery window I had to take this picture to send to you.