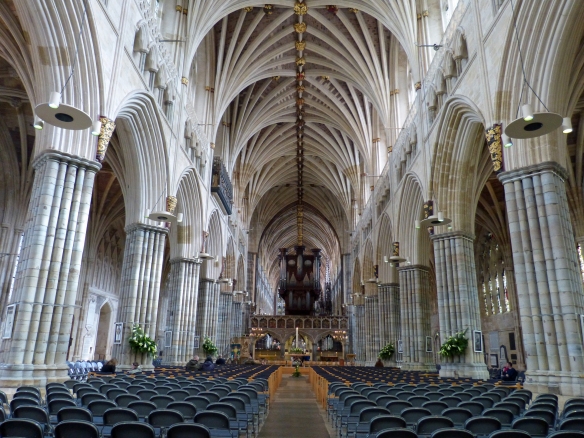 England has many great gothic cathedrals. One of the best loved is the cathedral in the city of Exeter in County Devon. More than 900 years old, this cathedral is an excellent example of English gothic, which was quite different in design from cathedrals in France. It was the Norman, William the Conquerer of Normandy in France, who brought the building of these great buildings to England shortly after conquering that nation in the year 1066.

The exterior of the cathedral at Exeter has a large frieze of sculptured saints across the lower front. Above it is a magnicent rose window. Not visible when looking directly at the front of the building are a pair of older Norman (romanesque) towers attached where transepts are usually found, between the nave and the choir. 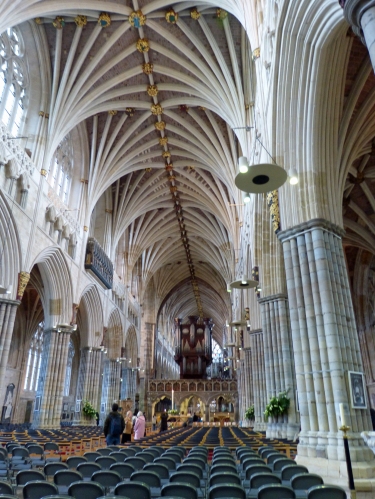 Because this cathedral is not as tall as most it gives the impression of being longer than the others. The organ pipes are placed between the nave and the choir.

This cathedral seems extraordinarily long – and is! The choir (that part this was most holy) is almost as long as the nave (the part where the public was admitted). Late gothic fan arches support the roof. They continue to the floor is a group of narrow columns. Gothic arches extend along the length of the building at the floor level in the center of the nave and also at the highest level of the interior walls, above the side aisles. Carved and painted sculptures grace each column. Most have an image of a head upon which rests a small, full-length saint in a golden enclosure.

On the south side of the nave stained glass has been installed in the windows while on the north side most of the glass is quite plain. The enormous rose windows on each end of the cathedral are the largest windows. This is often the case in cathedrals but these windows seem to be exceptionally large and beautiful.

There is much sculpture in this cathedral, including a large number of medieval tombs. There are also memorials to people who lived more recently. The photo below shows a pair of knights tombs from hundreds of years ago. Notice too the memorial plaques on the wall; they are found throughout the cathedral.

I was there for the noon Easter service but arrived too late to be seated in the choir. The choir cannot be photographed, and I certainly wouldn’t have taken pictures of worshipers there, but I did capture a shot of the choir boys as they exited.

On the north wall of the north transept is a large, blue-faced astronomical clock. The minute hand was added in 1759. A fleur-de-lys represents the sun cycles around a 24-hour dial, with noon at the top and midnight at the bottom. The moon’s phases are shown and the day of the lunar month can be read from the inner ring. The gold ball in the centre represents the earth. (Source: SacredDestinations.com)

I have tried to show you my experience on this Easter Sunday. If you have an interest in this cathedral, I recommend you visit this fine website where you’ll get a much better description of the cathedral along with more pictures: http://www.sacred-destinations.com/england/exeter-cathedral.

The picture of the exterior is “borrowed” from DevonGuide.com. My photos of the gray stone on the gray day were not really usable.