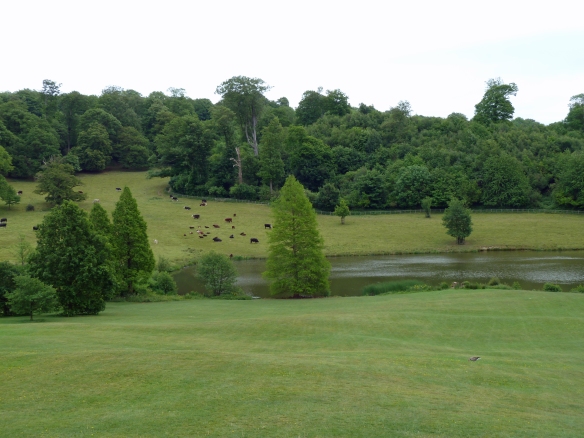 I am on a train riding across southern England. I going to tell you about some of the places and things I see along the way. After two days of gray skies and intermittent heavy rain, the sun is shining this morning and world looks newly washed.

Just after departing Totnes I rode through low rolling hills on which sheep grazed in meadows divided by hedge rows. Large old houses stand as they have for centuries in the center of prosperous farms. They are covered in white stucco and some have thatched roofs. I noticed a high church steeple, then noted the large estate house near it and a street of smaller homes running from the big house to the church. For centuries there was much money for the “Downton Abbey” class, and I suspect there still is. In the time when rich men owned all the land and peasant farmers eked out a living from a patch of that land and paid rent, tenant farmers’ parcels were bordered by hedges of strong, bristling shrubs.

As we head toward Exeter the train runs on the very edge of the Atlantic ocean, then along the shores of the River Exe which is more like a saltwater bay than a river. Yesterday when I came this way the river was nearly empty of water, the tide having gone out hundreds of feet.

Today I head northwest from Exeter toward Bristol which is near the border with Wales. Here the land is flatter but the large farms continue to cover the countryside. Every mile or so a small hamlet appears. On the edges of the cities (Exeter, Taunton, Bristol) there are Victorian brick row houses, hundreds – probably thousands – of them. These were homes to the people who left farming during the Industrial Revolution for jobs in the larger towns and cities. Each house is one room wide, two stories plus an attic high. They must have seemed lovely to the people, particularly the women, who moved into them. Indoor plumbing! Central heat! I wonder who lives in these homes today. They have probably always been rentals. Do they house mostly the newly arrived immigrants? Or old people who’ve been there for decades? Or young people just reaching independence? Or all of those and more.

My time in Totnes was fine. It’s a town that protects its history and obviously has done so for generations. William the Conqueror granted this part of Devon to one of his knights within two years of his victory at Hastings in 1066. In the past four days I dined in a building that’s been serving travelers since the year 1320. I spent part of my Easter Sunday in a cathedral that was begun even earlier. The day before I wandered around a massive gothic house built in the 1400s. The exceptionally beautiful church in Totnes was built in the same century. Next to it is a 16th century guild hall and in the other direction a 16th century home that proud residents have made into a repository of the history of Totnes. All of these places were built before the first settlers arrived in Virginia in 1607!

Outside the train window I see a pink farm house. In the field beside it there are eight or ten horses, all wearing blankets. The land is flat here and I can see for miles. Low hills appear in the distance. But soon I’ll be in the area where the Industrial Revolution was born and lived a long and successful life. Now I see modern buildings, shipping containers stacked high – Bristol is an active port for this island nation. A modern town – there’s a McDonalds! New brick apartment buildings. Steeples of old churches.

At Bristol we stop in an old Victorian station built of stone with gothic-style arches over the stairways to the platforms. Lots of ugly glass office buildings, hotels and apartments surround the station. The train is now packed. Today is a holiday for school children and for many adults so lots of people are returning home from Easter visits to family and friends. In addition, one entire line from the southwest to London has been shut down, and those passengers have joined this train. Seats on trains can be reserved in advance or not. I don’t have a reservation and I’m really in the wrong car but I found a seat reserved by someone who should have gotten on the train before my stop but didn’t. My luggage is taking another seat because there’s nowhere else for it. So far no one has fussed at me about this but the aisle has begun to be SRO.

Just passed a low, wide stream bordering a large pasture with many sheep. We’re heading east now, toward the famous Cotswold area of England. The scenery changes rapidly from beautiful pastoral views to crowded Victorian cities. Now I’m in Bath and in a modern station with a Starbucks. Bath is the posh town where George and I once heard a tour guide refer to McDonald’s as the “American Embassy.” This city is the setting of the stories told in some of Jane Austen’s books about the monied-class. The buildings here are built of honey-colored stone, and there are many large homes that were built for rich people who came here for the social season.

As the train nears London “America” seems to appear outside the window. Modern office buildings and apartments, stores with names we know well – TK Maxx instead of TJ, next door to McDonalds. In places there’s a real mix of ugly 19th century factories and warehouses being replaced by ugly modern apartments.

(Added later) Once in London I caught a very expensive cab ($35 for two miles) which took me across the city, through its heart, from Paddington to Charing Cross station. I passed by Buckingham Palace, the National Gallery, Trafalgar Square and other famous places. Only recently very tall high rise buildings have begun popping up in London.

There was a very strong wind and rain storm in southern England the night before I left Totnes. Wind and water damage as well as trees across the tracks played havoc with the train schedules. My train to Hastings was delayed and when boarded I found it to be a very slow train that stopped every five minutes for the entire 60 miles.

But here I am in Hastings, famous as the place where England was forever changed in many, many ways! I look forward to discovering it and sharing it with you over the coming days.

*There is a popular old song about England called “A Green and Pleasant Land.”  It defines the people was well as the landscape.

2 thoughts on “A Journey Across a Green and Pleasant Land”