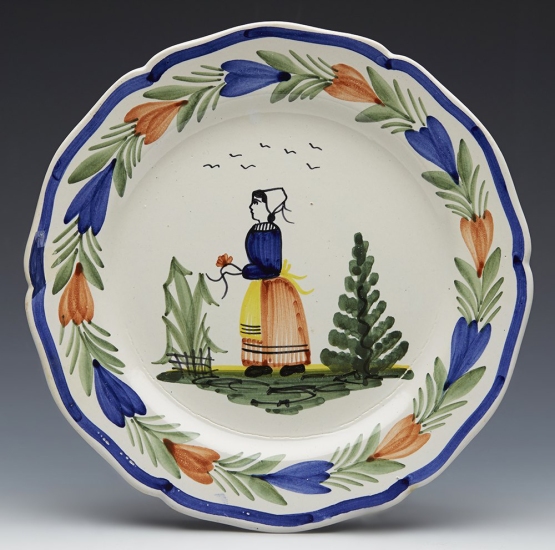 A half-mile walk along the river from the tourist office in Quimper took me to a tiny and very old (pre-Roman) settlement called Locmaria. It is known for two things: a church built ca. 1000 A.D. and the creation and production of the whimsical pottery known as “Quimper Faience.” Unfortunately, both the faience museum and the church were closed. 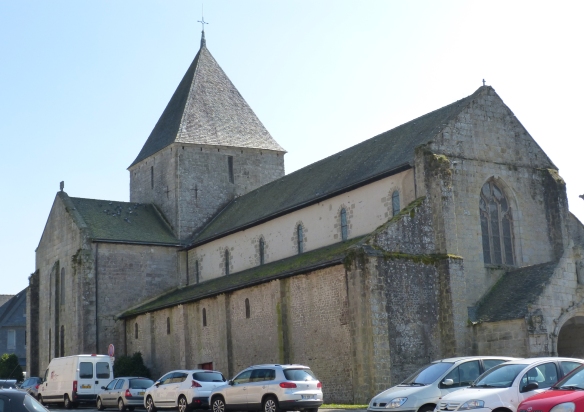 I’ve found no information about this building but it’s very likely that only the main, barn-like large part is a thousand years old. The tower and the appendage on the front as well as the porch and window on the front were probably added much later.

The church pre-dates gothic architecture so it’s what is known as “Romanesque” style. That’s a building with a high interior supported by lower appendages (aisles) on the sides. The walls are made of thick stone as are the pillars that support the roof. Windows are small and high – little light makes its way into these churches. This is a design that is found in the oldest existing churches in Europe and that remained popular for parish churches into the 15th or 16th century and beyond. It’s a shape that remains very popular still for barns in both Europe and America. 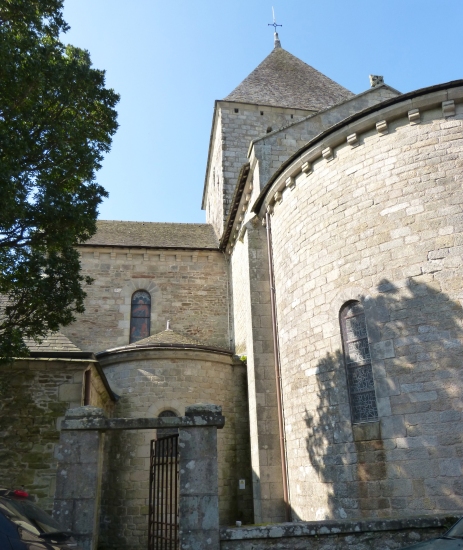 Parts of the church I believe were added in the 17th century include the bell tower, the altar, the “chevet” (the French word for the rounded part shown here on the right).

This church became a priory (monastery) church in the mid-1600s and some changes were made in that era. In all likelihood both the transepts and the tower were added then as was a renaissance porch at the entrance with a gothic window above it. A large priory building bearing the date 1664 was constructed adjacent to the church, and a cloister was added. The interior of the nave remains much in the original state. 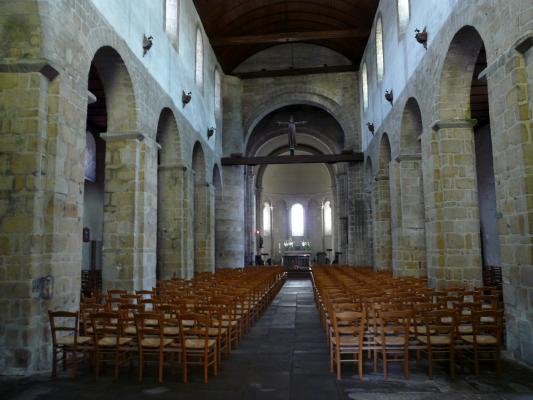 This photo of the interior (found on the web) shows the original nave with its Romaneque rounded arches, thick columns and high windows and the wooden ceiling.

There’s a pretty, medieval-style garden near the church. Daffodils were in bloom!

In this tiny area by the river are three (or more) potteries that have been creating the dishes that have made the name of Quimper famous around the world. There is a faience museum here but it’s closed until mid-April. I found a large store that features work by the best living painters and was able to sneak a few pictures there. It’s called Faiencerie Henriot. 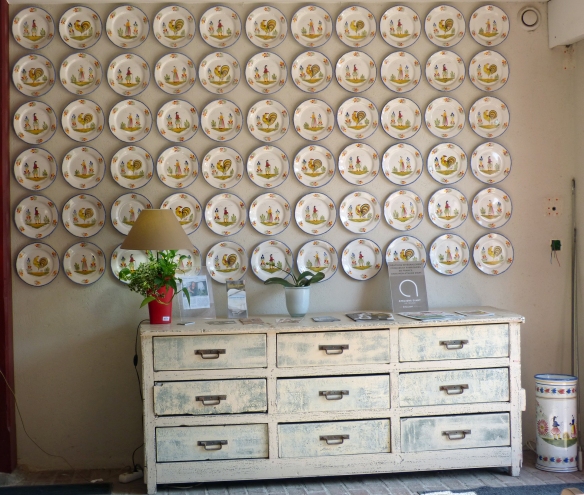 The display at the entry to Faiencerie Henriot.

The best examples of old Quimper designs that I found, however, are on the exterior of a closed pottery. It is the former workplace of Paul Fouillen whose work is being exhibited in a 2016 display at the Musée de Faience in Quimper beginning in April. Attached to the exterior of this building as decorations are a few old tiles with original designs. 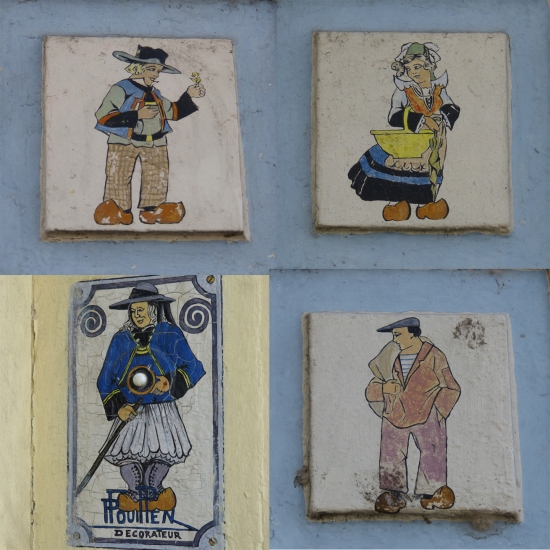 Old tiles on the closed factory of Paul Fouillen. The one at the bottom left has a door bell button.

Photo at the top of this entry lifted from this site: http://www.xupes.com. If you have an interest in acquiring Quimper dinnerware this may be a site that interests you.

More about the pottery: http://antiques.about.com/od/pottery/a/Quimper-Faience-Pottery.htm

5 thoughts on “Quimper: the Ancient and the Merely Old”