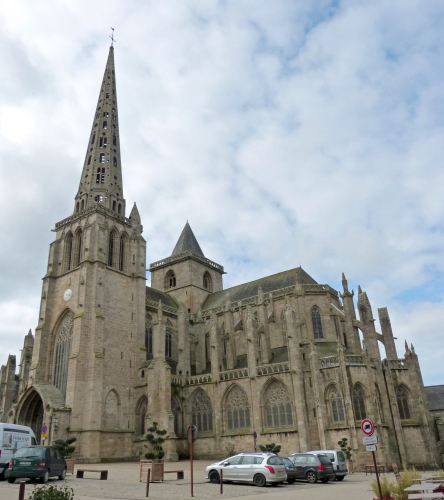 Today I drove farther west in Brittany and closer to the famous Cote de Granit Rose (Pink Granite Coast). This country is much like Ireland, with very green rolling hills with gorse bushes growing wildly. If you haven’t been to Ireland you may not know “gorse.” It’s an ugly yellow-flowered bush with very hard foliage that makes up the famous hedge rows of Ireland. Here the pastures and fields are large and open, unlike those in Ireland that were divided into small plots for the tenants of the landowner. That makes me wonder whether Brittany had a serf-based economy in the middle ages as much of Europe did. This was an independent country at that time that did things the Celtic way. That’s a question I should try to find an answer for.

The most interesting place I saw today was a 14th-15th century cathedral in a small city named Teguier. This is a classic French gothic cathedral, a bit smaller than most. It lost its bishop – and therefore stopped being a cathedral – in 1801. Frankly, there’s not much about its history to be found on the internet or in my Brittany guide book. A 12th century tower in the north transept is the only remnant of an older cathedral. Two other towers, one over the crossing and one over the south transept are rather short except that the southern tower has a magnicent steeple 63 meters (nearly 200’) tall. A beautiful cloister is somewhat hidden on the north side of the choir.

The cathedral is surrounded by well-maintained medieval buildings. I’m beginning to think every city and town in Brittany has a heart of 500 year old buildings. The town also has a full complement of granite buildings.  This is the granite coast, after all!

In the countryside there are big stone farm houses all along the roads. They remind me of the beautiful stone homes in the country around Philadelphia. Attached to them are stone barns rather like the farms of Maine with the “big house, little house, chicken house, barn” all attached to one another. In Maine those houses are made of wood – here everything is stone and must have taken a long time to build. Now and then a small house, often with white stucco over the stones and likely covered originally in thatched roofs, appears by the side of the road.

Here are a few pictures I took today. 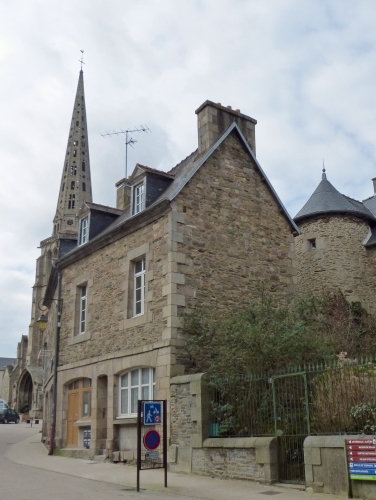 This view of a house in the town with a tower next to the cathedral (showing its steeple) demonstrates the universal use of granite stone here.

A line of shops that have been holding one another up for centuries. in the cathedral square of Treguier. 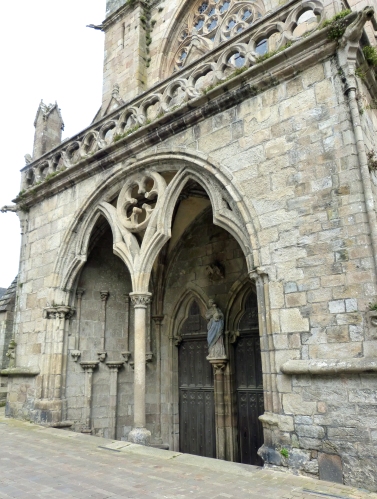 This is the western door and porch of the Treguier cathedral. Normally cathedrals are entered on the western side but here it seems the south side is used. This is a dark and unwelcoming portal, probably seldom opened. The style is renaissance. There’s a dirty, worn out statue of Mary and her baby visible between the doors.

This is the interior of the eastern end of the church, over and behind the altar. Note the beautiful painting on the ceiling. The glass in in the center didn’t show well in my photo but all three windows are stained glass. I’ve found no information about the age of the glass.

This is the southern side aisle. The French use chairs like these instead of pews in their churches. The three openings in the wall are tombs.

2 thoughts on “Driving through Western Brittany”