Yesterday I spent hours on trains going from Montpelier in southwestern France to Nice (pronounced “neece”) on the southeastern corner of France. Until the late 1800s Nice was part of Italy, and the atmosphere here still has that relaxed and happy feeling that Italy is known for.

The view from my train windows yesterday ranged from heavy industrial (oil refineries, for example) to the famous “Cote d’Azur” – Antibes, Cannes, and several less well known towns on the edge of the Mediterranean. There’s a relatively narrow band of flatter land and beaches between mountains and the sea. As we approached Nice the view was of beaches, beautiful city, and snow-capped mountains in the background. I took 85 pictures from the train but mostly I just got reflections on dirty windows. I’ll post three I didn’t delete here to show you a bit of what I saw along the way. These aren’t very good pictures — they were taken from a moving train! 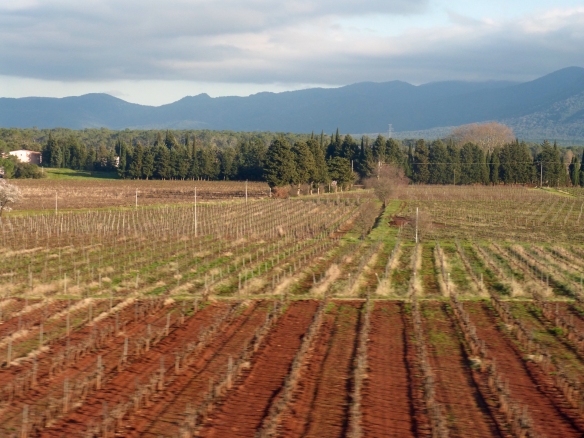 I passed many miles of vineyards yesterday. They are still in their wintertime mode but I’ve seen a few with leaves sprouting.

My apartment for this week is the best! My “hostess” is a lovely lady who has provided everything I could ask for – she even supplied fresh bread, coffee, milk, orange juice, butter and jelly for my breakfast today. The apartment is beautifully decorated and features a queen size bed that folds into a wall. You can see it by clicking here. This apartment is in the center of a busy residential area with all manner of shops and services within a few blocks. Public transportation here is excellent, with a tram a few blocks away that will take me to he center of the city and buses just at the door. One of Nice’s train stations is just five blocks away.

A distant view of Nice with snow covered mountains in the background. The low, late-winter sun was beginning to make everything golden. I tried for a shot that included palm trees but they aren’t good enough to share.

Last night I found a small bistrot near the apartment where I dined on a drum stick of a guinea hen – something I’ve never had before. The food was good and the charming owner/chef was very pleasant to me. Using a mixture of French, English and with help from his smart phone translator, we had a pretty good conversation.

I am here during Mardi Gras, and while I was in the café giant floats passed outside, on their way to join the opening parade which was held last night. I have tickets for two Mardi Gras parades this week. I hope to send you detailed reports and pictures soon.

I’m off to explore this wonderful city. George and I were here for two days in 2002 and I hope my memories help me find my way around.