In the center of Lisbon, just east of the rectangular post-earthquake block of commercial streets that I’ve written about already, there’s a busy area called Rossio. Rick Steves’ book Snapshot Lisbon calls this the “center of town” and says it’s built around a Roman racetrack (actually, there appear to be two of these long oval spaces.) I found a number of delightful sights to share with you.

First I found a square called Figuerira (Fig Tree Square) where a couple of ladies have flower stalls and there is an old French-style fountain and a statue of a long-gone king on a high pillar. The thing I liked best were the very old businesses that surround the square, still surviving. Let me show you some of them:

One of the oldest pastry shops and cafés in Lisbon. Notice the pretty door.

The exterior of a small shop selling only seeds, located on a busy (high rent) corner.

I sneaked a quick peek and a shot to show you the wall-to-wall spring seeds. I wonder what they do the rest of the year.

I went to the Rossio railroad station – actually, this whole area seems to be referred to as “Rossio.” It has an interesting purely-Portuguese facade. 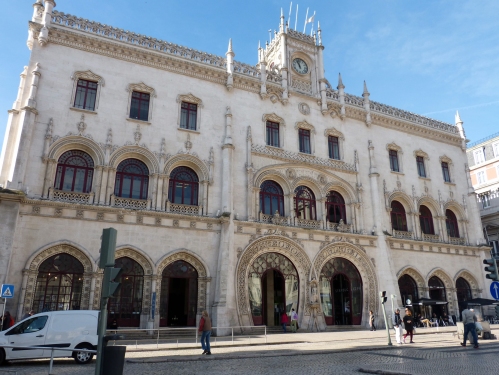 A broad avenue begins just above the station, in an area called Praca dos Restauradores where there’s a Metro station of the same name. This seems to be where “the other half lives.” Avenida da Liberdade is a street very reminiscent of Paris: 8 lanes wide with two boulevard strips of maple trees and water features. It’s lined with theatres, offices, and apartment buildings which seem to date from the late 19th century through the 70’s or 80’s. This street (or so I’ve read) was begun following the 1755 earthquake but was originally restricted to the aristocracy. I think today’s boulevard dates from the 1880s and is very influenced by Paris. I suspect anyone with money could enjoy living there now. Here’s just a peek at one of the narrow boulevard parks.

There are two of these boulevard spaces, each with a pond or fountain and tropical trees running up this avenue. Very fine apartment buildings line one side and you may notice the metro entrance on the right.

This is my last post about Lisbon. I’m taking an overnight train to Madrid, where I’ll enjoy a visit to what some people call the best art museum in the world, the Prado. Then on to Barcelona for a short visit.  More soon.

In the meantime, Happy Spring from Lisbon!

6 thoughts on “A Different Aspect of Lisbon”