This was an absolutely gorgeous day! The sky couldn’t be any bluer – the sun couldn’t be any brighter. I spent the day exploring “my” neighborhood which is called Alfama. The houses here are hundreds of years old. Many of them are tiny apartments like the one I’m renting. The residents are a mix of older people who have been here forever and recent immigrants who are at the bottom of the pay scale. This area is popular with tourists and features many hole-in-the-wall businesses selling souvenirs. Today I’ve decided to show you quite a few pictures so you’ll see some of what I saw today! 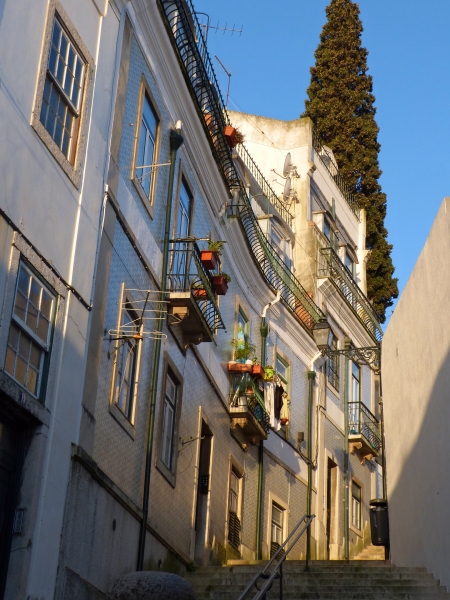 My days here begin with a 71-step climb to the street, but when the view at the top looks like this, as it did today, it makes me feel younger and ready to explore.

I began my day at the 11th century castle which is near my apartment but at the very top of the highest hill. There’s little left of this castle other than the walls — originally there was a small town inside the walls but it’s been gone for centuries.

Being at the top of the town guarantees a great view. In the distance in this picture you can see the Vasco de Gama bridge, built in the late 90s. (Don’t worry – the Golden Gate bridge is still safely in San Francisco.)

In the gardens of the castle there are many peacocks – and one black cat. (Look closely in the doorway.) I think the cat knows who’s boss! 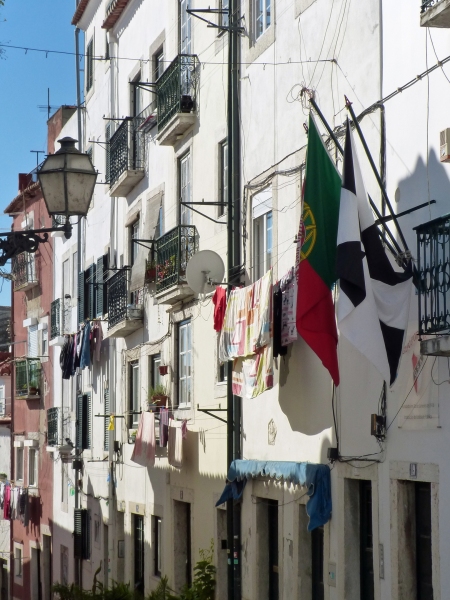 This scene is very typical of the neighborhood with clotheslines draped in wet laundry everywhere! 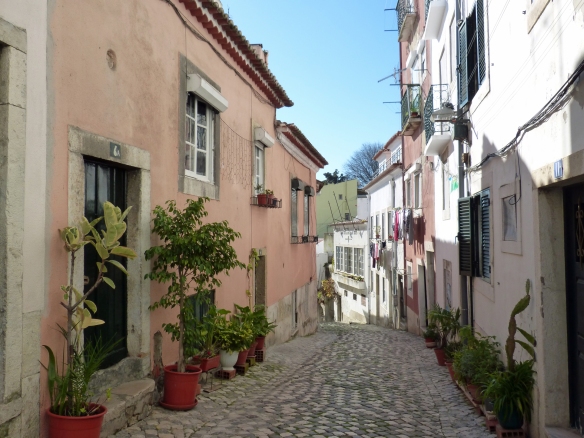 The streets are cobblestones and sometimes they are quite uneven. I like the way the people in this pink house have made their home attractive. 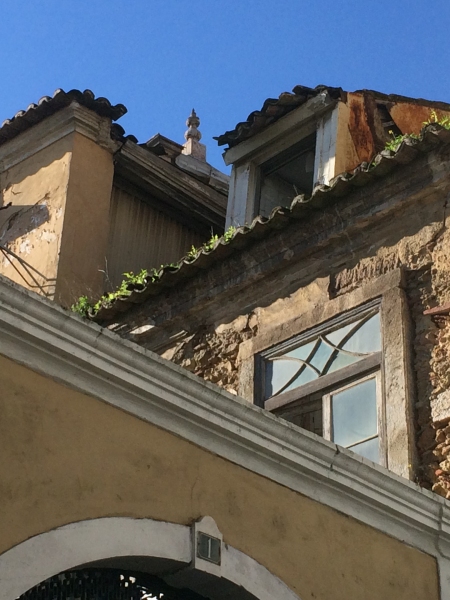 A close-up of a mix of rooflines that caught my eye.

As I walked I saw many churches and the door on one of them was open so I stepped inside. A very friendly young man began a conversation with me which I enjoyed. One of the things he told me is about this beautiful altar which he said is the only part of this church to survive the 1755 earthquake. That’s because it’s made entirely of stone – the design is not painted.

This is not the most charming of my pictures today but it may be the one that best represents the day: it names Alfama, it’s draped in laundry and it’s covered in tiles. 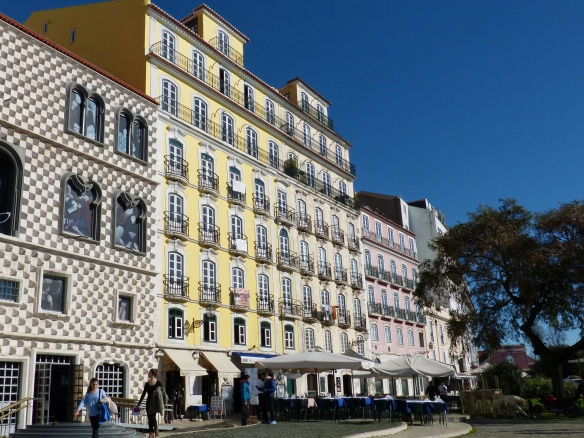 Eventually I walked to the bottom of the hill where I found these lovely post-earthquake buildings near the new cruise-ship terminal. Pretty, aren’t they? The checkered one is actually covered in pyramids with their tops pointing out (the dark spaces). The building houses a foundation and gallery of a contemporary artist. 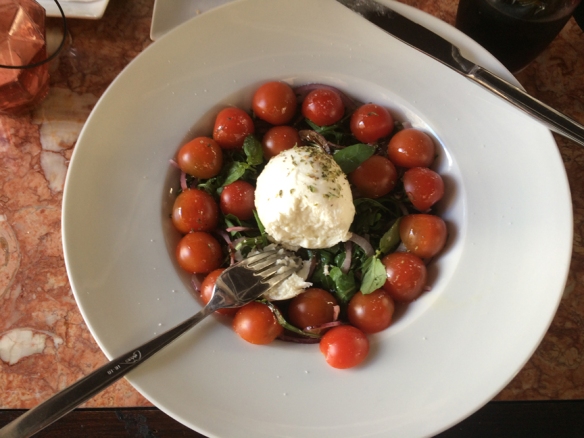 Once I reached the bottom of the hill I was ready for lunch! This lovely salad, based on the classic Italian mozzarella and tomato “Caprice” had the most amazing cheese ever. It was utterly fresh buffalo mozzarella, the freshest I’ve ever had. The waitress said it’s delivered daily.

I returned to the apartment early but my day had begun early so I was ready for a break. Tomorrow I think I’ll ride the trams!