This was my first view of Antwerp on arrival, the great hall of the railway station.

As would be expected in a city with a long, important and colorful past, history is everywhere in Antwerp! On Saturday I experienced two of the most important pieces of the city’s history, but just walking around this city’s streets allows a visitor to find history everywhere.

For example, the central train station, built between 1895 and 1905, is an enormous structure crowned by a large dome. The walls of the grand entrance and lobby are covered in marble – the space is so rich that I was reminded of St. Peter’s Basilica in Rome. I’ll use my picture here but clicking this link will show you several much better photos at Wikipedia.

The primary business and retail avenue of Antwerp begins at the station. A matched pair of elegant buildings stand proudly at the entrance to the Meir, as the street is called. They set the tone for the blocks ahead. Familiar names from the U.S. and Europe are found here but of much greater interest to me were the magnificent office buildings of the early 1900s.

The building that I liked best featured this angel holding lightning bolts. I’m guessing – though it’s only my guess – that this must have been the headquarters of the electric, telegraph or telephone company. The building takes an entire block, is very rich and elegant and its entrance features a dome.

One of the most notable buildings on this street is Europe’s first skyscraper. Built between 1929 and 1932 in the “New York style,” the building is called Boerentoren which means the farmer’s tower. At 287 feet tall, it was the tallest building in Europe until 1940.

When I reached the center of the old town I went to one of the oldest museums in Antwerp, the Museum Plantin-Moretus. The buildings of this museum were the home and the workshop of an early printer, Christophe Plantin. He opened a shop here before 1568 when he printed a Bible in five languages. His is considered to be the world’s first “industrial” printing works. His company was inherited by his son-in-law, Jan Moretus. The publishing house and the home were continuously in the possession of the Moretus family until 1876 when they are sold to the City of Antwerp.

The museum is a perfectly preserved 16th century upper-class home that displays many very old books. More importantly it is a rare view of very old type-cutting, type-setting and printing techniques. I have created a separate page to give you a better description. Please click here to see it. 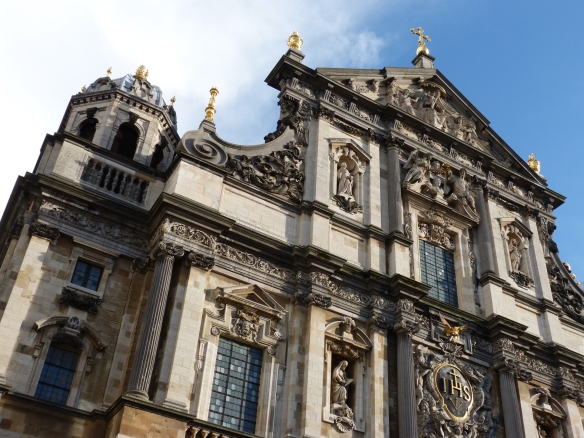 Can you see all the golden statues that were shining in the sunlight?

As I was walking along the street on this very sunny day, a ray of pure gold caught my attention.  At the end of a short, narrow street there was a beautiful church with several golden statues adorning its façade. I wasn’t the only one to be caught by this lovely sight – every tourist passing by lined up in the alley to take a picture.  I’d found the church of St. Charles Borromeo. When I entered it I discovered a church much in the style of churches in Italy. It was very beautiful.

Finally I went to the Cathedral of Our Lady in Antwerp. My husband loved to visit old churches and cathedrals when we traveled and he taught me to love them to. We have been to most of the famous cathedrals of Europe and to many not-so-famous churches as well. I can say without exaggerating that this is truly one of the most beautiful I have seen. Again, there’s so much to show you that I created a separate page – click here.

By Sunday morning I was feeling the effects of a head cold and the temperature had dropped to the lowest point of my trip to date. Today it’s even colder but my cold is improved. I’ll venture out in a while to find something new to show you, but for now please click on the links above to see more of the two ancient sites I enjoyed.