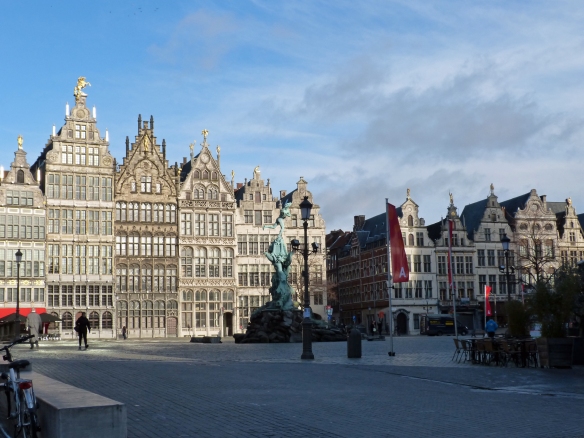 I traveled from Paris yesterday on a high speed, non-stop train and arrived in two hours. I brought with me a cold. (Here’s something about trip that I want to record: for the first time ever I went through airport-style security screening before boarding the train. People taking trains within France were not screened but those on international trains were. I was glad to see it, especially since all our luggage was x-rayed.)

I’m staying for the next two weeks in an old apartment in the historic port area of Antwerp– up 48 narrow, ancient stairs! The apartment is spacious and has some water views as well as a view of the new city museum (about which I’ll write more on another day).

Today I walked to the historic center of town. Here’s a little history of Antwerp, from Wikipedia, heavily edited by me:

“In the late 1400s the city of Antwerp grew in importance. A writer of that period stated that Antwerp became ‘the centre of the entire international economy.’ Antwerp was the richest city in Europe in the first half of the 16th century. Its golden age is tightly linked to the “Age of Exploration” [the discovery of the Americas, etc.] Antwerp grew to become the second-largest European city north of the Alps. The Venetian envoy stated that hundreds of ships would pass in a day, and 2,000 carts entered the city each week. During this period the entire region that became Netherlands and Belgium was controlled by Spain. In the century after 1541 the city’s economy and population declined dramatically, while rival Amsterdam experienced massive growth.” Read more here: https://en.wikipedia.org/wiki/Antwerp

I’m telling you this to explain why this small city has a golden center that was built 500 years ago. Here are some photos of what I saw today, most of them taken under heavy gray skies but for a short while the sun was out and the sky was blue. 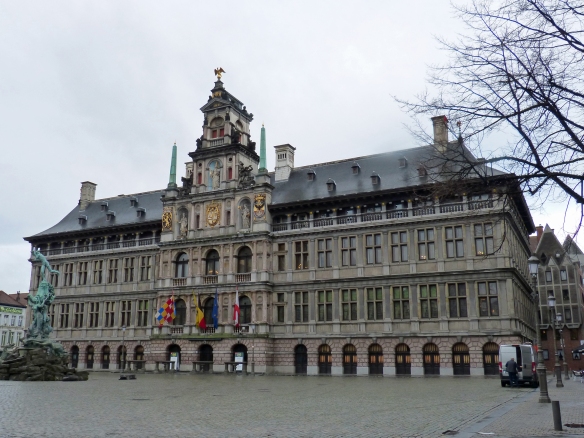 This is the Antwerp City Hall. It is the centerpiece of the “Grote Market” — the great market square surrounded on all other sides by tall, elegant 16th century buildings.

Here’s a view of a few of those fancy 16th century buildings, with a bit of the city hall on the left. 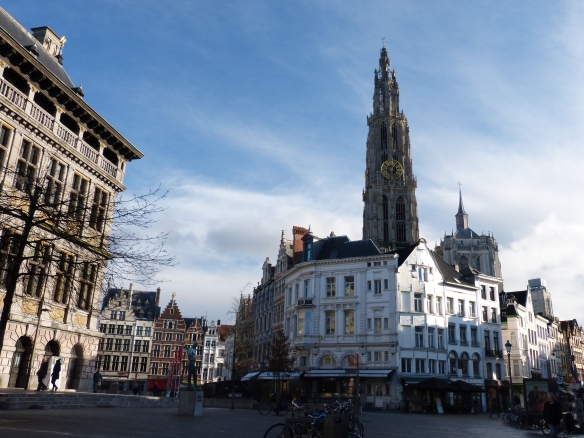 Antwerp’s cathedral is one of the largest and grandest of the many gothic cathedrals I’ve seen. I doubt I’ll be able to photograph the entire building but here you see the enormous tower and the fancy top of a chapel on the right.

This is the main entrance to the cathedral. Note the French-style carving of saints, angels, etc. with Jesus at the center top.

Around the old town today I saw many of these Madonnas installed on the corners of buldings. This one, near the cathedral, was the prettiest and most colorful.

Brussels also has buildings of this magnitude and style, which I hope to show you within the next two weeks. Those were built at least in part by the “guilds” – that is, associations of the tradesmen such as butchers and carpenters who were rich and influential in many of the medieval cities of Europe. I haven’t learned about the origins of the beautiful old Antwerp buildings but I plan to.

Today Antwerp is a city of about a half-million people with a metropolitan area that’s home to 1.2 million people. It’s a modern, cosmopolitan, up-to-date city surrounding a 500 year old core. Walking around the town suggests that the economy here is doing well. There are many new buildings and much restoration happening on old buildings. It still has a very active port, one of the Europe’s largest.

Here are a few more scenes, showing both old and modern bits of Antwerp.

Much of the housing in Antwerp is centuries old with modern buildings or modern facades interspersed. I liked this scene of cobblestone street, old buildings and lots of “resting” bikes.

I really noticed today how the open borders of Europe have changed the restaurant scene. Shown here a Greek restaurant and it’s neighbor, a “Balkan Grill” with a name that suggests both Bosnia-Herzogovina and Croatia. My lunch today was in an Israeli falafel café called “Mama’s Place” advertised on the street by a picture like “Aunt Jemima.”

Here’s another international eatery — I liked the looks of this one!

Finally, for those in my family who have a fondness for beer, three pictures of a shop full of Belgian beers. The Belgians are justifiably proud of their brews which they claim to be the best in the world. (I have to agree!)

Usually I hate window reflections in my photographs but this time I like it.

In the next two weeks I’ll be telling you more about Antwerp and some other great cities of Belgium and Holland.  And sampling more beer.