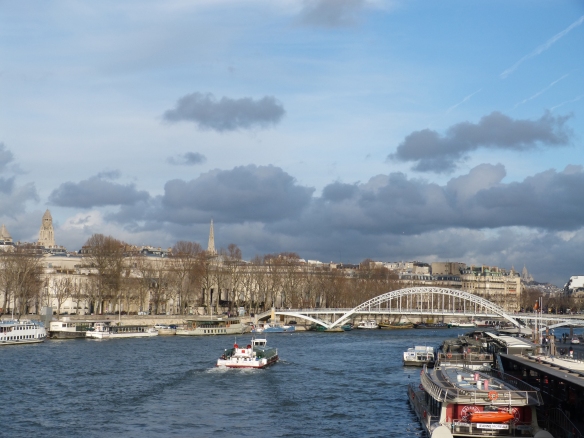 This was another super day. The weather has really been terrific while I’ve been in Paris (considering it’s January). I didn’t even wear a coat today. Skies were blue with some harmless clouds and I went exploring!

I began by walking through the Marais, the neighborhood that lies between my apartment and the center of the city. I sought out the traditional old Jewish neighborhood but because it was Saturday I found it mostly deserted and quiet – with the exception of soldiers with automatic rifles standing about 50 feet apart all along the streets.

Next I met my friend Carole, an American who has lived in the very heart of Paris for 40 years. Carole has come to my aid many times when I’ve been making plans for clients in Paris. It was fun catching up on news of her life and her family. 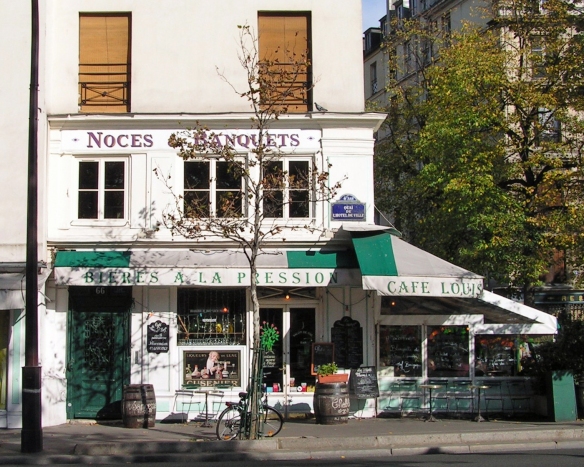 Café Louis Phillipe where I had lunch today!

For the first time I had lunch today in a restaurant I’ve been photographing since 2004. The exterior of this café is very charming and it turns out that the interior is just as classically  Parisian as the façade. The place is called Café Louis Phillipe and it’s on the street that runs along the north bank of the river Seine. The food was excellent. I have been depriving myself of vegetables so I ordered a “Market Salad” for a starter. A variety of veggies dressed in Vinaigrette comprised the very large salad. It could well have been my entire meal but I had also ordered the “Estouffade de beuf aux olives” which is a fancy way to say “pot roast.” It’s unlike any pot roast I’ve ever had except that it contained large chunks of beef as well as browned pieces of bacon (which really flavored the stew), black olives and boiled potatoes all in a wonderful rich gravy. It was fine! Just copy and google the name as I’ve typed it above to see it and to find recipes. I’ll be remembering this one when I’m home.

After lunch I boarded a “Bat-O-Bus” to sail on the Seine to the area where the Eiffel Tower is located. The French word for boat is “bateau” so that’s what all the river boats are called. This one is actually part of the Paris public transit system though it cost a lot more than a bus ticket. It was fun to be on the river on such a gorgeous day.

On of many houseboats along the Seine. It’s very expensive to live in one of these old barges — and very cold in winter!

My destination for the afternoon was the recently updated anthropology museum called Museum of Man (Musée de l’Homme). After a 50 million euro facelift that took more than six years the museum was opened in time for the global warming conference which was held in Paris in December. Using modern displays and graphics, the museum covers the history of mankind from our creation until today. I took many photos but it was so crowded, especially with families with school age children, that none of them are worth posting here. There was this one interesting old van called “the Muslim Shuttle” (in French) that I’m guessing was brought from Haiti or some place in Africa because the interior displayed video of the people who would have used it. I could find no explanation of where it had been used or why it was there but perhaps you’ll find it’s appearance interesting, as I did.

Finally, just to prove to my granddaughter Sarah that I went to the Eiffel Tower, here’s one more picture of Paris’s best known icon.