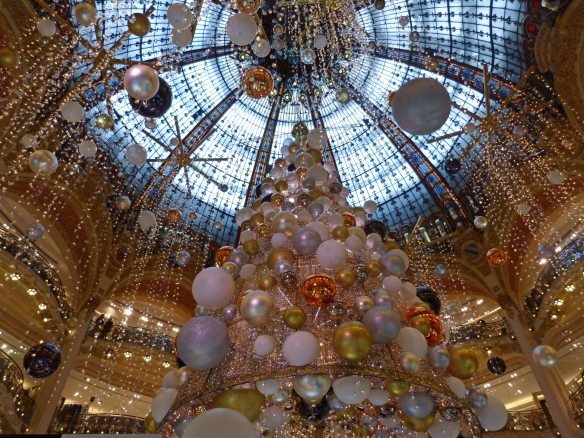 Christmas tree under the dome at Galleries Lafayette, Paris.

The department stores of Paris are famous for their extravagant Christmas time windows and store décor. The two most outstanding are called Printemps (which means Springtime) and Galleries LaFayette. I took my camera to see them in their holiday finery today. I especially enjoyed seeing the windows but my pictures aren’t good because of the reflections in the glass. I’ve chosen a few of the better ones to share here.

Printemps windows are quite traditional and feature dancing puppets. It was fun to watch the children be smitten by the beautiful scenes. The store is celebrating its 150th anniversary this year so it also featured its famous domes. 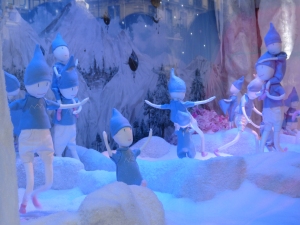 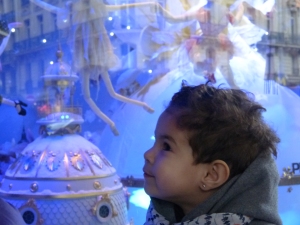 Galleries LaFayette had more 21st century ideas for the holiday: their windows featured robots. I wish my pictures had turned out better because I know my brother Blaine, in particular, would love seeing this. (If anyone knows a way to minimize reflections using digital cameras please share it with me!)

On one side of LaFayette’s main building there were several windows with scenes from the new Star Wars movie which I saw last week with my son Tim. The most fascinating thing was that everything was made from Legos – including Darth Vader and the storm troopers. I hope you can see that in these pictures.

Han Solo’s starship — made from Legos.

Inside each of these wonderful old stores is a gigantic stained glass dome. The one at the top of this post is the dome at Galleries Lafayette. Does anyone but me remember the old City of Paris department store in San Francisco which was around more than 40 years ago? It had a similar but smaller glass dome.

The grand opera house of Paris is only block from the stores. Opéra Garnier (named for its designer) is probably the most perfect and most extravagant building in a city filled with beautiful architecture. 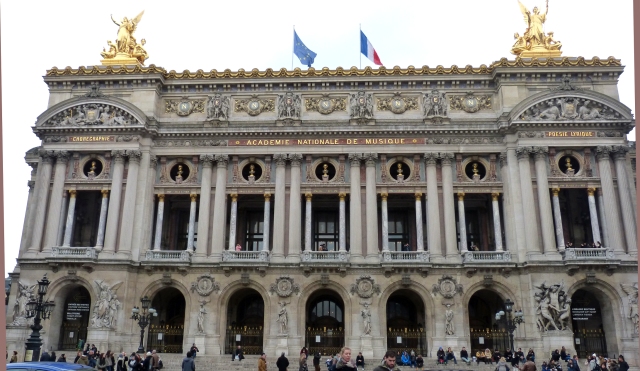 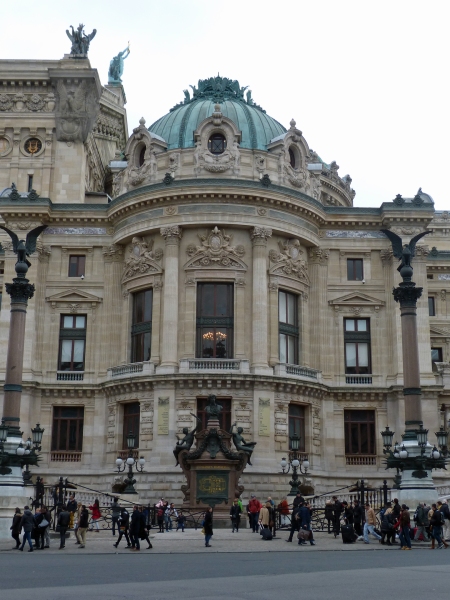 I was intrigued by the detail captured in this relatively small part of the opera house. Look closely.

If you’ve ever wondered why Paris is a city of broad avenues, matching buildings, and classical design, you may be interested in knowing that medieval Paris was demolished in the late 19th century and replaced by the streets and buildings we admire so much now. France actually had two Emperor Napoleons, and the second, called Napoleon III, used his lengthy term in office to build the world’s first modern city. He hired a man named Baron Haussmann to oversee the work. The department stores I mentioned here are on Boulevard Haussman, the center of the finest part of Paris. I read a terrific book about this recently. It’s Paris Reborn: Napoléon III, Baron Haussmann, and the Quest to Build a Modern City by Stephane Kirkland.

I have often been asked why I started this trip in the winter. The truth is I did it for lower prices and to avoid the millions of tourist who flock to Paris and other places in warm weather. But being here for Christmas is an added plus. If you’re coming to Paris, you might want to come during the holidays. It’s enchanting!

3 thoughts on “Making the Most Beautiful City More Beautiful-er”