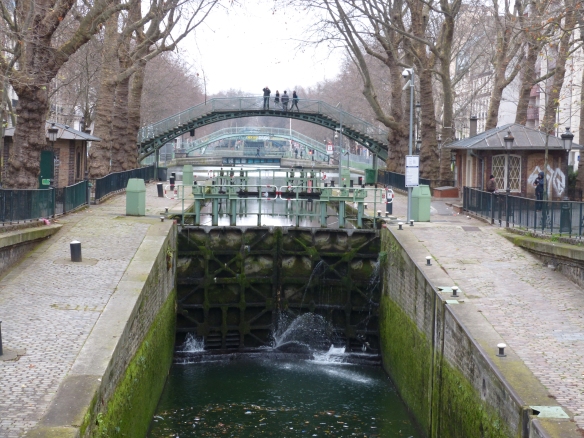 Canal St. Martin in Paris on a cloudy day.

Today all the physical activity of the past few days seems to have caught up with me – I’m tired. My knees aren’t as happy as I am about all that walking I did yesterday although I did walk three miles so far today. This was a more typically Parisian day with gray skies and cooler temps.

Because I’ve been to Paris many times, often as a tour guide, I’ve seen all the famous sites. This two-week stay in Paris is intended to make me what the French call a “flaneur.” That’s a person who walks around Paris, simply observing. I’m staying in the eastern part of the city this trip in an area I don’t know well. It’s near an old canal called Canal St. Martin which has become a magnet for young professionals in recent years. I’ve read a lot about it since my last extended stay here and I want to discover the shops, galleries and bistrots I’ve read about. So, on this cloudy day that’s where I headed. Today is a holiday, of course, so almost everything is closed but I walked along the canal taking pictures of the old bridges that cross it.

As I began to tire of the sameness of the walk a magnificent old building a block away caught my attention. It was the St. Louis Hospital, built in 1605-06. There’s a high wall surrounding it which I’d love to enter with my camera. This ancient place was replaced by a modern hospital in the 1980s. 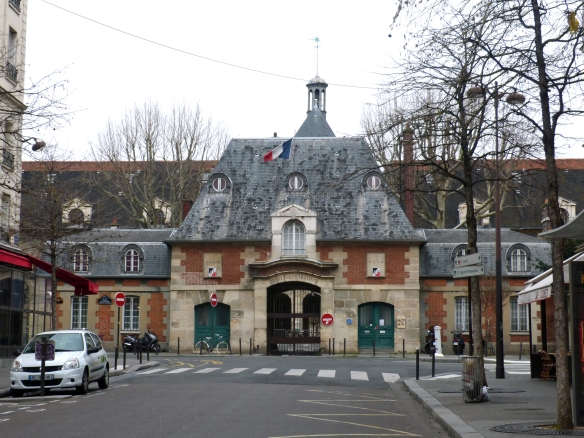 As I turned to walk away I immediately realized I was at the site of one of the cafés attacked in November, the Café Ca. Rillon Bistrot. Christmas trees have been located nearby to be covered in messages to the victims. As I began to walk away I noticed directly across the narrow street another of the cafés where people were killed that night, Le Petit Cambodge. Truly I didn’t set out to find any of the sites of the horror that occurred in Paris on that terrible night. These places made me feel very sad. It’s hard to understand why the terrorists would have picked these places on this narrow old street where everything gives the impression of poverty. This is not a neighborhood of yuppies – it’s a diverse area where people of many nationalities are trying to survive in this expensive city. 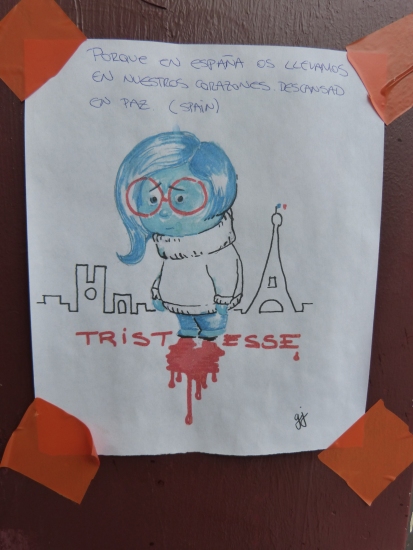 Earlier this week my grandchildren introduced me to this little character from the film Inside-Out. Someone from Spain taped this to the café window. Tristesse is French for sadness.

As it approaches central Paris near the Bastille the canal has been pushed underground and a street named for Richard Lenoir now exists above it. The street is a wide boulevard with a park running down its center the full length of the underground canal, ending at the site of the old Bastille prison where the French Revolution began. Today a modern opera house stands where the prison once did.

After a break at McDonalds for coffee, I walked another mile but my knees insisted I take them home. So here I am, with a report to you that’s pretty much a “downer,” back in my apartment by 4:00 pm (Paris time) working up the energy to go look for an open restaurant for a good dinner this evening.

The issue that most concerned me in the months I was planning this journey is how my knees will hold up. I hope I don’t end up touring Europe in bicycle-driven pedi-cabs!

2 thoughts on “Every Day Won’t Be Glorious”