This picture is for my granddaughter Sarah who loves the Eiffel Tower.

The sun was bright all day, the sky was blue and the weather was warm. Winter here has been much warmer than normal, just like at home. The geraniums are still covered in fresh red blooms.

My Iphone tells me I walked 6.5 miles today. My knees didn’t love that but the rest of me did! I began at places you’ll remember from the recent terrorist attacks in Paris. Then I went to the center of Paris, to the Place de Concorde, the square where the guillotine was installed during the French Revolution. It was renamed “Place of Peace” some years later. From here the view includes the Louvre, Tuilleries Garden, the National Assembly (where the lower house of the French legislature meets), the Eiffel Tower, Invalides church (with the high gold dome), the Arch de Triomphe, the Elysée Palace (the French White House) and Napoleon Bonaparte’s St. Madeleine church. Quite a view!

I walked through the Christmas market along the Champs Elysée which will continue in Paris for a few more days. It’s rather like New Bern’s Mumfest with Santa Claus. 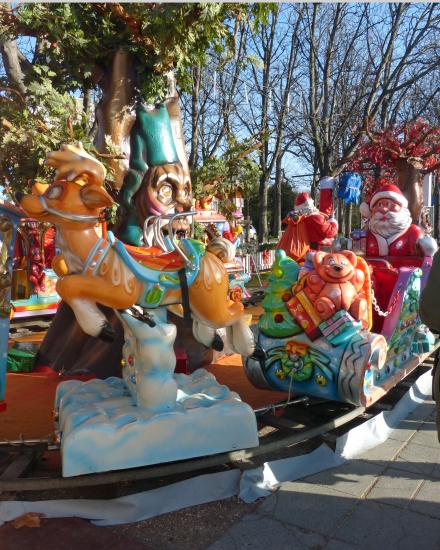 The Santa train at the Christmas market.

Next I walked along the Seine, through the heart of Paris, past the Louvre and Notre Dame and Paris city hall (the hotel de ville) and into the area known as the Marais (translation: marsh). This area was where the richest people lived in the 16th and 17th centuries – their homes remain and today are mostly museums. Nearby is the ancient Jewish quarter, still the home of some Orthodox families.

Security everywhere is extraordinary! On the metro a trio of armed guards rode the train, stepping off at each stop to watch who was getting onto the train. In the Marais I turned a corner to discover one of three guards with AK47s in front of the Holocaust memorial. I literally jumped back when I saw the first one – a man holding a weapon like that, dressed in fatigues.

My apartment is in the 11th arrondissement, one of 20 in Paris. “Arrondissement” is a word that means district or neighborhood. The attacks in November were centered in this neighborhood. In another year I’d be out tonight, watching the Eiffel Tower sparkle at midnight. Instead, I’m in for the night, out of harm’s way.

This morning I walked to the Place de République where the monument in the center of the square which you must have seen in the news recently is still surrounded by candles, flowers, and lots of visitors. The Bataclan theatre is near my apartment. There’s a small green space across the street from the theatre which has also become a memorial. It’s all very sad but the French people are determined not to let the terrorists win. They are braver than me, and will no doubt be out by the thousands tonight.

Some of the thousands of items at the base of the large statue in Place de la République.

In the Marais I stopped to buy bread at a bakery with a sign over the front door declaring it’s the “best in France.” While there I sneaked a photo of one of the beautiful cakes for new year celebrations.

The cake says “Bonne Année” as do I! That means Happy New Year!

I hope you have a happy, healthy and successful 2016!

2 thoughts on “What a glorious day!”