The photo of the little guy you see above hangs near my desk. He reminds me of the ancient village called Noyers-sur-Serein in the Yonne region of northern Burgundy. There are a number of wooden sculptures to be seen on the streets of Noyers (pronounced nwah-yair, rhymes with “air.”) Carvings on one window frame represent the choice between living a good life or a bad one by an angel in one corner and an executioner in the other. I suspect these sculptures have been made recently but I’m not sure. They are just one element of the medieval village of Noyers.

The village is bordered on the east by a small, slow river named Serein. Old stone houses incorporate remnants of the town wall and its conical towers; they line the lane that runs between the river and the village. Walking here on a perfect springtime evening with irises and wisteria blooming along the ancient walls is enchanting. Sycamore trees shade the river bank. At the end a large old manor can be glimpsed. Although the village is fully occupied few people are encountered in the early evening. Their presence is felt in the small gardens and carefully tended homes of Noyers.

Wikipedia’s short article about Noyers says the village was settled by the time the Romans arrived in France. The timber-framed buildings and the passage ways surrounding the town square are centuries old. A visitor can peek into the town dungeon. A market is held on the square regularly. Modern restaurants and shops occupy the old buildings around it. 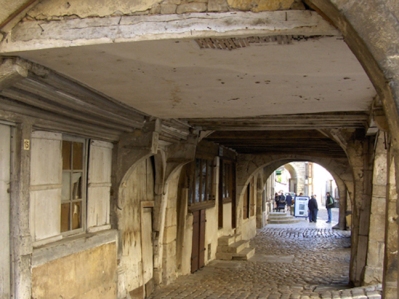 Residents of the town protect their heritage and proudly display flowers in window boxes, clever signs, and well-kept homes. Noyers is a member village of the association of “Plus Beaux Villages de France” (the association of the most beautiful villages of France).

Learn more of the history of Noyers and ideas for visiting by clicking here.

One of my favorite blogs is written daily by Ken, an American who lives in a small town in the Loire Valley region of France. It’s entitled “Living the Life in St. Aignan.”  Click here to read Ken’s post about his visit to Noyers.

Watch this 2-minute video on YouTube for a quick tour of Noyers.

To view more of the small village go to maps.google.com and search for “Noyers-sur-Serein, France.” Google has both a street view that allows you to “walk” the village streets and a “photo sphere” that provides 360° view of some of the streets.